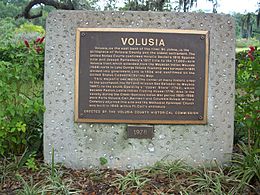 Volusia ( və-LOO-shə) is an unincorporated community in Volusia County, Florida, United States on the eastern shore of the St. Johns River, about three miles south of Lake George and across the river from the town of Astor in Lake County. Volusia is one of the oldest European settlements in Florida. The main route through the town is State Road 40, which crosses the St. Johns on the Astor Bridge.

Volusia County takes its name from the community of Volusia, which was named such by at least as early as 1815. The site of Volusia was an established native settlement by 1558 when its indigenous inhabitants, the Mayaca, were first encountered by Spanish explorers. Since then, it has been the location of several forts, trading posts and a port on the St. Johns River, as well as the site of conflicts with the Seminole people during Florida's tumultuous beginnings.

The indigenous Mayaca people inhabited much of the area now known as Volusia County along the St. Johns river. A settlement just south of Lake George known Maiaca (or Mayaca) was likely the largest of the Mayaca villages. Historical sources frequently refer to the native Timucua as having inhabited large areas of Florida including areas along the St. Johns river. However, other sources posit that the Mayaca were a distinct group of people with their own language, customs and settlements. Alliances were formed between smaller native groups. The village of Mayaca (Mayarca) was identified as belonging to the Outina confederation at one point, and with the Saltwater Timucua at another.

According to Franciscan missionary Francisco de Ayeta in his 1691 deposition, the Mayaca lived south of Freshwater Timucua territory, and were described as "being so wild a nation and of no sense at all, who in no way want to make a village, nor even plant for their substenance, nor ever live in a determined place." 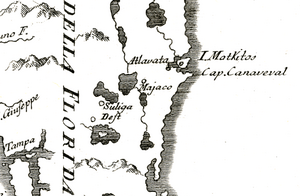 The first European mention of present day Volusia was by Hernando de Escalante Fontaneda, who in memoirs covering the period of 1558-1575, mentions Mayaca.

In 1566, Pedro Menéndez de Avilés made a voyage up the St. Johns river to meet with principle caciques (chiefs). He encountered the village of a cacique known as Macoya, believed to be the Mayaca mission of the early 17th century, and thus Volusia. After venturing a little farther up river, Menéndez was threatened with war by Macoya if he did not turn back.

By about 1602, Mayaca had a mission church and reportedly 100 natives who had not yet been baptized. The general consensus at the time was that the Mayaca were a distinct people from the (Sweetwater) Timucua, although the occupied part of the territory traditionally identified as Timucuan.

A fort called Antonio de Anacape was built in 1680. Slabs of crude mortar were found on a small indian mound about 500 yards from Volusia's Landing.

In 1689, a list of Timucua-speaking missions lists the mission of San Antonio de Mayaca with 30 family, or approximate 150 people, although there is strong eveidence that Mayaca's inhabitants did not speak the Timucua language.

A 1717 census conducted by the Spanish refers to the native village of San Joseph de Jororo (Maiaca Language) and enumerates 33 natives.

By the mid-18th century, the Mayaca had been all but wiped out by invading native tribes from the north, including the Yamassee and the Euchees.

In 1763, James Spaulding and Roger Kelsall partnered to open five stores in Florida, including one in Volusia known as Spaulding's "Upper Store." The store is believed to have existed on the west bank of the St. Johns river near Volusia from between at least 1765 and 1787.

After the U.S revolutionary war, the British transferred Florida back to Spain in the Treaty of Versailles. James Spaulding's Upper and Lower stores were allowed to continue operating.

The Spaulding's Upper store later came under the ownership of Panton, Leslie & Company and was known as Panton, Leslie Trading House. It existed on the east bank at Volusia from 1787 until at least 1834.

The first known use of Volusia as a geographic place name occurs 1815, and is revealed in a series of Spanish Land Grants and Confirmed Claims as follows:

Horatio S. Dexter vs United States, 4/5/1815 claim: Dexter deposes before the Board, September 8, 1824 that Joseph Hernandez came in April 1821 to his plantation, Volucia, to obtain "boats and hands" to survey his land and the surveyor was Burgevin. Burgevin certified the survey on that date.

To Sect. of Treasury, Rush Amiens 15, Octobre In November 1817, the Spanish Government agreed to my claim for land in Velutia. James Alexander, my attorney, proceeded to St. Augustine to carry these transactions into effect; he was occupied with the voyage and these transactions when cession of the Floridas was ratified 19th February 1819. Meanwhile U.S. settlements have been commenced. Mitchell, Alexander and Dexter have interveined(sic) in my behalf to explain my delay. Signed Joseph Rattenbury

F.M. Arredondo petitions for his claim of 3/21/1817, to 30,000 acres as follows: 15,000 acres west of the St. Johns River, by the path of the Chocochale Indians across from the Panton, Leslies, known as the Upper Store on the east side of the river.

Burgevin certifies 5,000 acres waste lands on west side of the St. Johns between the Panton, Leslie store, opposite side and lands which the Widow (sic) Pengree cultivated, ending in front of the Horse Landing, also east side, 4/5/1821. 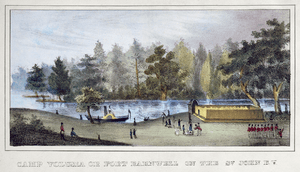 By 1822, Volusia is described by William Hayne Simmons in his Notices of East Florida as "...a very fine tract, lying on both sides of the St John's (sic) - the greater portion being on the western side of the river." The author goes on to say that the settlement was made nearly three years ago by Horatio S. Dexter, its present proprietor.

Volusia County was named after the then-largest community, Volusia, when the Florida legislature divided Orange County on December 29, 1854. At the time, Volusia County had as few as 600 residents.

The origin of the name Volusia remains uncertain as there exists no documentation establishing the etymology. There are several theories:

All content from Kiddle encyclopedia articles (including the article images and facts) can be freely used under Attribution-ShareAlike license, unless stated otherwise. Cite this article:
Volusia, Florida Facts for Kids. Kiddle Encyclopedia.