Astor is an unincorporated community and census-designated place (CDP) in Lake County, Florida, United States, located on the west side of the St. Johns River between Lake George and Lake Dexter. The community straddles State Road 40, with the community of Volusia in Volusia County across the St. Johns to the east and Astor Park to the west. The population was 1,556 at the 2010 census. It is part of the Orlando–Kissimmee–Sanford Metropolitan Statistical Area.

The Astor Bridge over the St. Johns River between Astor and Volusia.

According to the United States Census Bureau, the CDP has a total area of 2.5 square miles (6.5 km2), all land (this measurement seems to exclude Astor's network of canals, which extends over 4 miles (6.4 km) in length, providing river access for many of its residents.) Astor lies entirely within the boundaries of the Ocala National Forest.

Astor is primarily accessible by land via State Road 40, which is the main highway through the community. State Road 40 bisects the Ocala National Forest, approaching Astor from the west and continuing east over the Astor Bridge across the St. Johns River to Volusia, in Volusia County.

The Astor area and much of the land along the St. Johns River was inhabited by Timucua natives prior to settlement by Europeans. Early attempts at settlement included an English trading post in 1763, and in 1822 a plantation growing sugar cane and oranges was established by Jewish immigrant Moses Elias Levy. By 1838 the Seminole Wars had begun and the United States government established Fort Butler to defend the river as the primary route of transportation inside Florida. These earliest efforts at settlement all met with failure due to war or disease, and until the 1870s the area was largely deserted.

In 1874, William Backhouse Astor, Jr. from New York City's wealthy Astor family purchased over 12,000 acres (49 km2) of land, upon which he began to establish a town he called Manhattan. New settlers arrived by steamboat to the town which Astor had endowed with a church, schoolhouse, botanical garden, and free cemetery. William Astor also built a hotel, saw mill, and eventually a railroad, the St. John's and Lake Eustis Railway, which departed town headed inland towards the communities of Eustis and Leesburg. A few miles to the west of town, a satellite community called Astor Park grew up along the shore of Lake Schimmerhorn (named for Astor's wife, Caroline Schermerhorn Astor). Over the next twenty years Astor saw his town grow, but the Manhattan name never caught on. When William Astor died in 1892, the town was officially renamed Astor in his honor.

John Jacob Astor IV inherited his father William's estate and continued to promote the town and their business interests in Florida. Following his demise in the sinking of the RMS Titanic in 1912, the estate passed to his son, Vincent. William Vincent Astor was not interested in his grandfather's Florida enterprises, and so the Astor family's interests in the area were sold. This, combined with a severe decline in steamboat travel on the St. Johns due to increased availability of rail travel signaled the end of the town's prosperity and prominence. The first Astor Bridge was built in 1926; by 1928, Astor's hotel had burned down and the railroad was abandoned, leaving Astor without telephone or telegraph service for the next few decades.

Today the community of Astor is largely reliant upon tourism, and is a popular spot for winter visitors from the north and fishing, hunting, and boating enthusiasts. 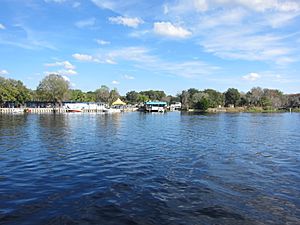 St. Johns River at Astor. Across the river is the Astor Marina.

There were 641 households, out of which 20.3% had children under the age of 18 living with them, 55.2% were married couples living together, 7.6% had a female householder with no husband present, and 30.7% were non-families. 24.3% of all households were made up of individuals, and 12.6% had someone living alone who was 65 years of age or older. The average household size was 2.32 and the average family size was 2.68.

All content from Kiddle encyclopedia articles (including the article images and facts) can be freely used under Attribution-ShareAlike license, unless stated otherwise. Cite this article:
Astor, Florida Facts for Kids. Kiddle Encyclopedia.