Leesburg is in central Florida, between Lake Harris and Lake Griffin, at the head of the Ocklawaha River system. It is part of the Orlando–Kissimmee–Sanford Metropolitan Statistical Area. It is about 45 miles NW of Orlando, 270 Miles N of Miami, and 221 Miles SE of the State Capitol at Tallahassee.

Leesburg is the home of Lake–Sumter State College (LSSC), which also has campuses in Clermont and Sumterville, Florida. It is also the home of Beacon College. 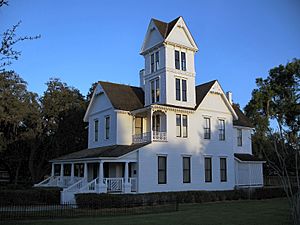 Leesburg was first settled in 1857 by Evander McIver Lee. Several of Evander Lee's brothers followed him to the area. One of these brothers, Calvin Lee, was credited with giving the town its name.

The city of Leesburg was first incorporated in 1875, and was the county seat of Sumter County for a time until Lake County was formed in 1887.

In 1938, the WPA began work on the Venetian Gardens waterside park, on the shores of Lake Harris. The canals and gardens of this park have been a centerpiece of the community ever since.

On March 19, 1982, Ozzy Osbourne's guitarist Randy Rhoads, as well as the band's cook and bus driver, were killed in a plane crash at Flying Baron Estates.

The citrus industry was the principal business in Leesburg for many years, until devastating freezes in December 1983 and February 1985 persuaded growers to move their groves further down the Florida peninsula.

In 1997, Leesburg Bikefest started. It has since become an annual spring tradition, with upwards of 250,000 people visiting the motorcycle festival.

Today, most of Leesburg's growth and economic development is the result of the increasing popularity of the area as a retirement destination and the rapid growth of nearby Orlando.

In 2011, the Leesburg High School boys basketball team won the 4A state championship.

Several major highways pass through Leesburg, including U.S. Highway 27, U.S. Highway 441 and S.R. 44. Florida's Turnpike passes just to the south and west of Leesburg. Leesburg was on the western leg of the Dixie Highway.

From 1922 to 1924, the city's Cooke Field was used by the Philadelphia Phillies for their spring training sessions. On March 14, 1923, the stadium was used for the site of an exhibition game between the Phillies and the St. Louis Cardinals. In 1936, the city built the Ballpark at Venetian Gardens, which was used by several minor league baseball clubs that played in the Florida State League from 1937 to 1968. The city won league titles in 1941 and 1946. Since 2007, the city has been the home of the Leesburg Lightning, a wood-bat collegiate summer baseball team in the Florida Collegiate Summer League.

During the 1920s, sharpshooter Annie Oakley, who had a residence in Leesburg, performed shooting exhibitions at Cooke Field, including one for the Philadelphia Phillies. 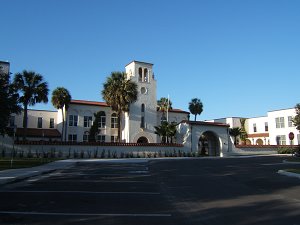 All content from Kiddle encyclopedia articles (including the article images and facts) can be freely used under Attribution-ShareAlike license, unless stated otherwise. Cite this article:
Leesburg, Florida Facts for Kids. Kiddle Encyclopedia.