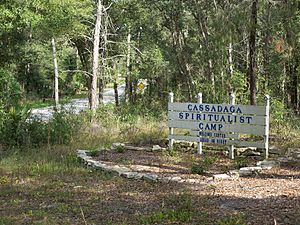 Cassadaga (a Seneca Indian word meaning "Water beneath the rocks") is a small unincorporated community located in Volusia County, Florida, United States, just north of Deltona. It is especially known for having many psychics and mediums, and has consequently been named the "Psychic Capital of the World".

Colby worked with several spirit guides who would give him knowledge. One of his spirit guides was an Indian named Seneca, who had manifested to Colby during a seance in Lake Mills, Iowa. According to Colby, Seneca had instructed him to travel south to Florida, where he eventually arrived at a place called the Blue Springs Landing, near Orange City, Florida. According to Colby, the area that Seneca had led him to was the same area that Colby had seen during the seance in Iowa.

Today, the Camp features the Cassadaga Hotel, a central auditorium, The Colby Memorial Temple, a community library, the Caesar Forman Healing Center, a Camp Bookstore, and a welcome center. Also, there is the Andrew Jackson Davis Educational building, used for musical performances and gatherings. Nearby is the Colby-Alderman Park.

The principles of spirituality that are taught by the people at Cassadaga state, "Spiritualism has no dogma or creed, just a simple set of nine principles to help guide our lives". According to the teachings of Spiritualism, it is the "Science, philosophy, and religion based upon the principle of continuous life". On March 14, 1991, the Southern Cassadaga Spiritualist camp was declared a U.S. Historic District. The Cassadaga Spiritualist Camp is a federal tax-exempt Church currently governed by a Board of Trustees.

All content from Kiddle encyclopedia articles (including the article images and facts) can be freely used under Attribution-ShareAlike license, unless stated otherwise. Cite this article:
Cassadaga, Florida Facts for Kids. Kiddle Encyclopedia.