Valdez is an unincorporated community located in southwest Volusia County, Florida, within the city limits of DeBary. Valdez is located along U.S. Highway 17-92 (Charles Richard Beall Blvd.) where it intersects with Barwick Road, just north of the St. Johns River.

Valdez was named in honor of Antonio Valdez, the secretary of the Spanish navy in 1787, when the Spanish explored the area. He chose one of his protégés, Lt. Jose del Rio Cossa, to conduct an exploratory survey of Florida's naval store resources. In this survey, Cossa created an enormous map in which he renamed Lake George (now Lake Monroe) to Laguana Valdez. Although this name did not persist, pre-American land deeds referred to what is now Lake Monroe as Valdez.

In 1928, Florida Power & Light began constructing a power plant in Valdez on the north shore of the St. Johns river. 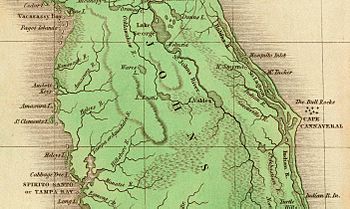 All content from Kiddle encyclopedia articles (including the article images and facts) can be freely used under Attribution-ShareAlike license, unless stated otherwise. Cite this article:
Valdez, Florida Facts for Kids. Kiddle Encyclopedia.