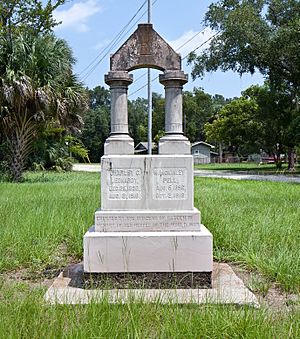 World War I Memorial in Osteen

Osteen is an unincorporated community in the southwestern region of Volusia County, Florida, United States. Osteen is near the St. Johns River as well as typically native wetlands, swamps, forests and wildlife of Florida. Osteen attracts a number of visitors for these qualities. There are numerous camping areas and preserves such as the Hickory Bluff Preserve, a 150-acre nature preserve with hiking and horse trails.

Osteen was named after Hezekiah Ellis Osteen (1821–1904) a cattle rancher, who with his wife, Susannah Gaskins Osteen (1826–1886), originally settled in the community in the 19th century. Prior to Osteen, the community was known as Saulsville. A member of the Osteen family fought for the Confederacy in the American Civil War, and was either wounded or killed in battle. A plaque is dedicated to the founders of the city in the civic center that was built in 1968. The city was once incorporated and the abandoned city hall is located on the corner of Railroad Avenue just west of the post office. Also located within Osteen is the Cypress Point Golf Club, a nine-hole executive length golf course.

All content from Kiddle encyclopedia articles (including the article images and facts) can be freely used under Attribution-ShareAlike license, unless stated otherwise. Cite this article:
Osteen, Florida Facts for Kids. Kiddle Encyclopedia.