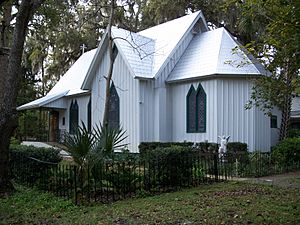 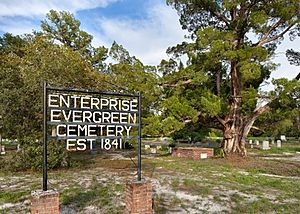 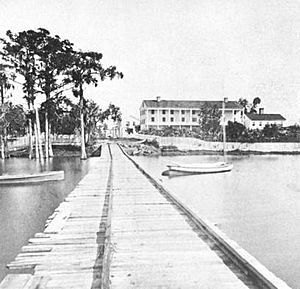 Enterprise is an unincorporated community in Volusia County, in the U.S. state of Florida, and its former county seat. Situated on the northern shore of Lake Monroe, it is flanked by the cities of DeBary and Deltona. Enterprise was once the head of navigation on the St. Johns River and at various times, the county seat for three counties: Mosquito, Orange, and Volusia. In 2006 Volusia County government approved a historic overlay which designates Enterprise as an "area of special concern" as a historic village. This ensures that any development must follow strict guidelines and establishes a historic district within the community.

In 1565, Pedro Menéndez de Avilés explored the St. Johns River, perhaps reaching Lake Monroe. At the time of contact with Europeans, the area was home to the Mayaca Indians, who lived in small villages. They collected snails and shellfish, hunted turtles, deer and alligators, or gathered roots, nuts and berries. The Enterprise midden or shell mound accumulated over thousands of years from the debris of cooking and toolmaking by the ancestors of the Mayaca. Beginning in the First Spanish Period, Florida Indians fell victim to European diseases, forced labor, missionization, and slave raids from the English militia of the Carolinas allied with invading tribes from the north. By the 1760s, Florida's native cultures including the Mayaca, Timucua, Apalachee, Ais, Surruque, Calusa, and Tequesta had been decimated. Later called Seminoles, Indians from Alabama and Georgia moved in to fill the void left by native Florida tribes.

Following the acquisition of Florida by the United States in 1821, the Seminoles had conflicts with settlers and troops throughout the Seminole Wars. In 1835, they burned Palatka, a major port on the St. Johns River, then the major artery into Central Florida. Consequently, "Fort Kingsbury", a stockade defense, was built in 1838 at Enterprise in the area of Thornby Park, across the lake from "Fort Mellon", built in 1836 at Mellonville (now Sanford).

To displace the Seminoles, in 1842 the Armed Occupation Act was passed, granting 160 acres (0.65 km2) to settlers who would clear, cultivate and hold 5 acres (20,000 m2) for five years. Over 200,000 acres (800 km²) south of Palatka were opened for development. One of more than 1,000 who applied was Cornelius Taylor from San Pablo (now Mayport), a former timber agent and first cousin to General Zachary Taylor. In 1841, he and about 20 others founded "Enterprise" at Fort Kingsbury, which had been abandoned after six weeks, and filed for homestead the next year.

Taylor built an inn atop the shell midden to attract visitors traveling by shallow-draft steamboat from Palatka, the furthest upstream ocean-going vessels could navigate. Orange groves were planted, a gristmill established, together with a sawmill to cut Southern live oak, prized by the U.S. Navy for warships. In 1843, Enterprise became county seat of "Mosquito County". It was renamed "Orange County" in 1845, with the county seat moved to Mellonville. An epidemic believed to be smallpox claimed Taylor's oldest daughter and 9 slaves in 1842, and he left in 1847.

In 1851, Jacob Brock bought land a mile west of the original settlement, where he built a wharf and laid out streets and lots. A steamboat captain with "a notable reputation for the lavish and original nature of his profanity", he had transported to Enterprise many invalids seeking the climate and sulfur springs believed to be curative. In 1854, he completed The Brock House, a 2+1⁄2-story hotel with accommodations for more than 50. Enterprise became county seat of "Volusia County" that year, and Brock operated the first regular steamboat passenger service from Jacksonville to Palatka, expanding to Enterprise.

It was a 206-mile (332 km) trip aboard the Darlington, which departed Jacksonville at 8:00 AM on Saturday, timed to receive passengers discharged from ocean-going ships. It would arrive and spend Sunday in Palatka, from which it departed at 5:00 AM on Monday morning, docking at Enterprise that evening. Only by daylight did prudent captains navigate the narrow, crooked upper part of the St. Johns River. Crew members had to watch for snakes, slithering aboard out of Spanish moss in overhanging trees, and also for alligators, shot before they could tangle with the paddlewheel. Soon, an additional danger would imperil the waterway—the Civil War.

The South Atlantic Blockading Squadron division commanded by Union Captain George Balch set out to capture Confederate steamboats on the St. Johns River. Seized at Lake Monroe on March 14, 1864, was the Hattie Brock, named for the captain's daughter, and loaded with 150 bales of cotton for export to help finance the rebel cause. It was towed to Brock's wharf to load wood fuel. From the veranda of The Brock House, the New York Tribune would report, Miss Brock expressed grief and indignation at the capture of her namesake by the Yankees. The marines were reportedly glad to get away as soon as their boats were supplied. They took with them 2 black males and 3 black females from their stop in Enterprise, and 2,000 pounds of sugar from a refinery, which was then demolished, about 2 miles (3.2 km) farther downriver on the east side of DeBary Creek.

Following the rebellion, the state experienced a boom in tourism, and Enterprise became a fashionable resort and sportsmen's paradise for fish and game. "No dreamland on earth", wrote Harriet Beecher Stowe in 1873, "can be more unearthly in its beauty and glory than the St. Johns in April." Sold and renovated in 1876, The Brock House was then the most famous hotel in the state, with guests including President Ulysses S. Grant, President Grover Cleveland, General William Sherman, Jay Gould and members of the Vanderbilt family. Others came from England, France and South America. In 1877, Enterprise was incorporated.

Another notable visitor was (Samuel) Frederick deBary of New York City, a wealthy importer of champagne and other French wines. After staying at The Brock House in 1870, he would buy 400 acres (1.6 km2) to the west in 1871 and build "DeBary Hall", a mansion and hunting lodge. Acquiring much more land, deBary planted orange groves and pecan trees. In 1876, he established the DeBary Merchants Line, a steamship company contracted to carry mail from Jacksonville to Enterprise. He contributed money to build the Gothic Revival All Saints Episcopal Church, completed in 1883. It was listed on the National Register of Historic Places in 1974.

The Atlantic Coast, St. Johns & Indian River Railroad in 1885 linked Titusville with Enterprise, from which ran a spur line to the Jacksonville, Tampa and Key West Railway at Enterprise Junction in present-day DeBary. But in 1888, Florida experienced an epidemic of yellow fever. The population of Enterprise dwindled, and DeLand became the county seat. The freezes of 1894 and 1895 wiped out the citrus industry in much of the state, including the deBary groves. Enterprise voted to de-incorporate in 1895. Its distinctive midden, once featured on the city seal, would disappear, the shells used to pave streets and sidewalks.

In 1924, the George E. Turner Power Plant was built near the shore of Lake Monroe. Around this time, the Methodist Church organized and was named after a popular preacher named Rev. Barnett. The town was renamed "Benson Springs" in 1927, a change petitioned by the owner, employees and guests of the Benson Springs Hotel. Never popular, the name "Benson Springs" changed back to "Enterprise" in 1937, the year the deteriorating hotel was razed to increase room for the 'Florida United Methodist Children's Home. The Florida East Coast Railway branch was abandoned in the 1950s, its track removed in the 1970s. Dismantling the George E. Turner Power Plant began in 2007, and was completed in February 2008. Today, Enterprise struggles not to be absorbed by Deltona. In 2000, The Enterprise Preservation Society, inc. (EPS) was established to protect the rural character and history of Enterprise, and to prevent annexation into Deltona. EPS was helpful in obtaining protections from Volusia County, including designation as a Community of Special Interest, implementation of the Enterprise Local Area Plan, which establishes additional landscape and architectural standards, and finally the designation of the Enterprise Historic District, encompassing several blocks of the historic downtown area. In 2003, Enterprise Elementary School Building #8 was slated for Demolition, but instead was deeded to EPS. In 2007, with the help of a Volusia ECHO grant, EPS hired Youngblood & Sons to move the building to a vacant property at 360 Main Street, donated to EPS by Sandra and Roy Walters of Enterprise. Following Several years of renovation and thousands of hours of volunteer work, it reopened as the Enterprise Heritage Center & Museum in October, 2014.

All content from Kiddle encyclopedia articles (including the article images and facts) can be freely used under Attribution-ShareAlike license, unless stated otherwise. Cite this article:
Enterprise, Florida Facts for Kids. Kiddle Encyclopedia.