Palatka (pronounced puh-lat-kuh) is a city in Putnam County, Florida, United States. The population was 10,558 at the 2010 census. It is the county seat of Putnam County. Palatka is the principal city of the Palatka Micropolitan Statistical Area, which is home to 72,893 residents. The city is also home to St. Johns River State College, St. Johns River Water Management District Headquarters, and Ravine Gardens State Park. The area is well known for its local festivals, most notably the Florida Azalea Festival and the Blue Crab Festival. 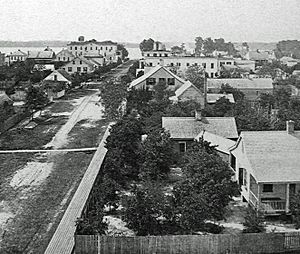 The area was once the domain of the Timucuan peoples, two tribes of which existed in the Palatka region under chiefs Saturiwa and Utina. They fished bass and mullet, or hunted deer, turkeys, bear and opossum. Others farmed beans, corn, melons, squash, and tobacco. However, infectious disease that came with European contact and war devastated the tribes, and they were extinct by the mid-18th century. The last people evacuated with the Spanish to Cuba in 1763, when Spain ceded Florida to Great Britain after the Seven Years' War.

During the late eighteenth century, remnants of Creek and other tribes made their way to Florida. In a process of ethnogenesis, the Seminole tribe was formed. They called the location Pilo-taikita, meaning "crossing over" or "cows' crossing". Here the St. Johns River narrows and begins a shallower, winding course upstream to Lake George and Lake Monroe.

In 1767, Denys Rolle (1725–1797), an English gentleman and philanthropist, established Rollestown on the east bank of the St. Johns River at the head of deep-water navigation. His 78,000-acre (320 km2) plantation was a utopian commercial and humanitarian experiment, recruiting settlers off the streets of London, including paupers, vagrants and pickpockets." Two hundred indentured servants arrived to clear wilderness for agriculture and livestock. Unaccustomed to either hard work or a subtropical climate, however, they scattered. Rolle next imported slaves from West Africa to tend chickens, hogs, goats and sheep, or produce cotton, indigo, citrus and turpentine for export to England.

He built a mansion and laid out a village, but trouble beleaguered the "ideal society." In 1770, a disgruntled overseer sold over 1,000 of his employer's cattle and disappeared with the money. Rolle hired new overseers and bought more slaves, but the plantation failed to prosper. When Spain resumed control of Florida in 1783, Rolle abandoned the colony and chartered a ship to carry his household belongings, livestock and slaves to a 2,000-acre (8.1 km2) estate on Great Exuma in the Bahamas. The point in East Palatka, is still called Rollestown.

With changes of sovereignty in Florida came numerous changes of ownership in Pilo-taikita, now contracted to Pilatka. In 1774, naturalist William Bartram noted an Indian village on the west bank, but it was abandoned before later European Americans came to settle. The current existence of Palatka can be traced to the settlement established there in 1821. After the United States acquired Florida in 1821, Nehemiah Brush established a ferry and bought a 1,200-acre (4.9 km2) tract in 1826 and another of equal size the next year. The site became a distribution point, where goods were shipped by a New York company to supply immigrants at the Grant of Arredondo, which lay to the west.

The arrival of land-hungry American settlers created confrontations with the resident Seminole. When the government attempted to relocate the tribe to the west of the Mississippi as part of Indian Removal starting in 1833, the Second Seminole War began. The Seminole attacked and burned Pilatka in 1835. Recognizing the site's strategic importance for control of the St. Johns River, the main artery into Central Florida, the US Army in 1838 established Fort Shannon, named for Captain Samuel Shannon. It included a garrison, supply depot and hospital. During 1842 the Seminole were driven from the area, and consequently Fort Shannon was abandoned by the army in 1843. Settlers made use of the military piers and buildings, including eight blockhouses, to develop the town. By 1847, it was growing rapidly. In 1849, Putnam County was created, with Pilatka the county seat. With the help of Judge Isaac H. Bronson, it was incorporated as a city on January 8, 1853. 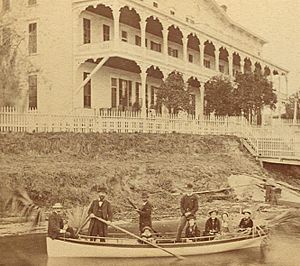 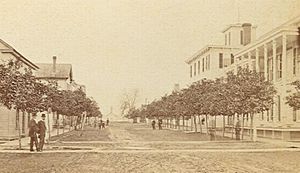 During the 1850s, Florida in general and Pilatka in particular gained a reputation as a haven for invalids escaping northern winters. Steamboats carried them up the river in increasing numbers. One visitor wrote that amusements included "sailing, fishing, rowing, walking, riding in buggy and on horseback, whist, euchre, backgammon and hunting."

The tourist trend was interrupted by the Civil War, when gunboats cruised the waters and Pilatka was destitute and largely deserted. On October 7, 1862, the USS Cimarron fired several shells over the town after seeing some Confederate cavalry. Mary Boyd pleaded with Union Commander Maxwell Woodhull to spare Pilatka, assuring him that the horse soldiers were not residents. He complied.

Among the notable residents of Pilatka during the war was Confederate spy Lola Sánchez and her sisters. Sánchez became upset when their father was falsely accused of being a Confederate spy by the members of the Union Army and imprisoned. Officers of the Union Army then occupied their residence in Palatka, Florida. On one occasion Sánchez overheard various officers’ planning a raid and alerted the Confederates forces. As a result, the Confederate forces, led by Capt. John Jackson Dickison, surprised and captured the Union troops on the day of the supposed raid in what is known as the Battle of Horse Landing.

Following the war, tourists returned to find new hotels, including the Putnam House, built by Hubbard L. Hart, and the Larkin House, which had accommodations for 250 guests. Steamers ran up the Ocklawaha River to Eustis, Leesburg and Silver Springs, or the St. Johns River to Enterprise and Sanford. Industries included logging, raising cattle and hogs, and orange groves. On May 24, 1875, the post office changed the spelling to Palatka, ending confusion with Picolata.

By the 1880s, several competing railroads crossed the community, which became an important junction. These included the Florida Southern Railroad, the Jacksonville, Tampa and Key West Railroad, the St. Augustine and Palatka Railway, and the Georgia Southern and Florida Railroad. On November 7, 1884, Palatka suffered a devastating fire. Guests arrived that season to find no accommodations, and so continued on the train south; this was the beginning of a gradual shift of tourism elsewhere. The city lost trade, shipping and transportation preeminence to Jacksonville, on the coast. With its downtown rebuilt in brick to be fireproof, Palatka emerged a finer place.

In 1893, A. E. and H. S. Wilson of Saginaw, Michigan bought the Noah J. Tilghman & Son sawmill, which processed cypress lumber. Renamed the Wilson Cypress Company, it expanded operations and became a major employer. At its peak, it was the second largest cypress mill in the world, but closed in 1944. The Great Freeze of 1894 and 1895 destroyed Palatka's citrus groves for five years, which were formerly a major attraction. The ill-fated Cross Florida Barge Canal was once intended to pass the city. Today, tourism remains important.

Palatka has a humid subtropical climate, Köppen climate classification Cfa. The area's warm and humid climate is caused primarily by its proximity to the Gulf Stream, which flows off the east coast of Florida. There are two major seasons which characterize the area. One is hot and rainy, lasting from June until late September. The other is the dry season, October through May, which brings more moderate temperatures and less frequent rainfall. 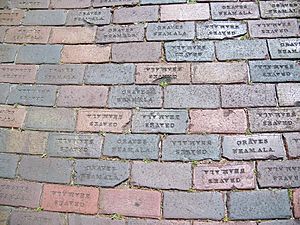 As with many cities in the United States, development has occurred in a radial pattern from the city center to beyond the incorporated area. Due to the historical importance of Palatka as a southeastern interior port, much of the urban development is oriented toward the riverfront. The eastern sections of the city, which include downtown and the historic districts, are characterized by a gridded street system. A significant amount of the original brick roads survive in this area. The western outlying suburban areas are primarily characterized by an amorphous road pattern.

The city of Palatka is actively working toward redevelopment of its riverfront and downtown area. The rise of the automobile, and the inevitable shift to a big-box economic format, has taken its toll on the once thriving regional center. Like many other American cities, Palatka's downtown has had to repurpose itself to cope with an auto-centric society. 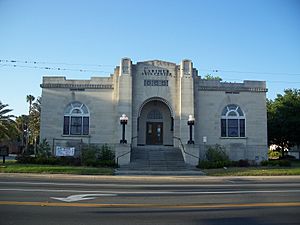 Several architectural styles are represented within the city. Victorian, Colonial Revival, Art Deco, Classical Revival, and Prairie School are all prominent building styles in the historical districts. One of the most notable buildings is the old James Hotel at 300 St. Johns Avenue. The hotel was constructed by Dr. George E Welch, president of the now defunct Putnam National Bank. Designed by architect Henry John Klutho in 1916, this building is a prime example of the Prairie School style. Klutho also designed the Larimer Memorial Library, named after the wife of James Ross Mellon, eldest son of Judge Thomas Mellon. The library is a fusion of Prairie School and Art Deco. Today, the building is home to the Art Council of Greater Palatka and houses local art gallerys. The Larimer was added to the U.S. National Register of Historic Places in 2008.

Though there are no discernible architectural styles in the outgrowth areas, a notable building technique has been used in the construction of the 23,000-square-foot (2,100 m2) Children's Reading Center Charter School. Five monolithic dome structures crown the facility and give it a distinct style.

There were 3,880 households out of which 31.5% had children under the age of 18 living with them, 34.0% were married couples living together, 24.9% had a female householder with no husband present, and 37.6% are other types of families. 32.7% of all households were made up of individuals and 16.5% had someone living alone who was 65 years of age or older. The average household size was 2.42 and the average family size was 3.10. 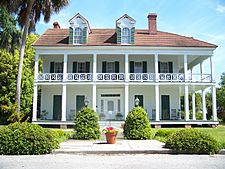 The following entries are listed on the National Register of Historic Places:

Palatka has one sister city.

All content from Kiddle encyclopedia articles (including the article images and facts) can be freely used under Attribution-ShareAlike license, unless stated otherwise. Cite this article:
Palatka, Florida Facts for Kids. Kiddle Encyclopedia.