The city is named after the portion of the St. Johns River upon which the city is built. The river bends here, and the area is sheltered by trees that are perennially green.

The area was first inhabited over 7,000 years ago by natives drawn by the warm mineral spring. The spring, locally known as the "Original Fountain of Youth", attracted guests in the 19th century; there were more than a dozen hotels near the spring. Today the sulfur-scented spring water feeds an adjacent public swimming pool before flowing the short distance to the St. Johns River. The Green Cove Springs area was first developed by George E. Clarke in 1816 when he was provided land, under a Spanish land grant, to build a sawmill. Green Cove Springs was established in 1854 as White Sulfur Springs. Renamed in 1866, it became the Clay County seat in 1871. 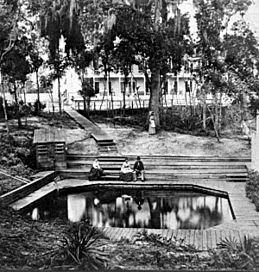 Agriculture and tourism were two of the primary economic ventures until the end of the century, when Henry Flagler's railroad began taking tourists further south into Florida. In 1895, the Great Freeze destroyed the area's citrus crops, and tourism all but ended. The 1920s saw renewed development, with automobile traffic bringing in tourists again. The Great Depression of the 1930s saw the end of growth again for the city.

The period immediately before and during World War II again brought new growth to Green Cove Springs. On September 11, 1940, the U.S. Navy opened Naval Air Station Lee Field in honor of Ensign Bejamin Lee who had lost his life in a crash at Killinghome, England, during World War I. In August 1943, the facility was renamed Naval Air Station Green Cove Springs and consisted of four 5,000-foot (1,500 m) asphalt runways. After the war, NAS Green Cove Springs was downgraded in status to a Naval Auxiliary Air Station (NAAS) as part of the greater NAS Jacksonville complex. A total of 13 piers were constructed along the west bank of the St. Johns River adjacent to NAAS Green Cove Springs to house a U.S. Navy "Mothball Fleet" of some 500 vessels, primarily destroyers, destroyer escorts and fleet auxiliaries. In 1960, the Navy decommissioned NAAS Green Cove Springs and the pier facility. Some of the mothballed vessels were transferred to foreign navies, while others were relocated to other Reserve Fleet locations.

In 1984, the city annexed the former naval base into the city to utilize it for further growth and development as the Clay County Port and Reynolds Industrial Park. The air station is now a private airfield known as Reynolds Airpark (FAA airfield identifier FL60) with a single 5,000-foot (1,500 m) asphalt runway currently operational, although reportedly in poor condition. Although the original air traffic control tower is still standing, attached to one of the former Navy aircraft hangars, the airfield remains an uncontrolled facility.

Green Cove Springs is the birthplace of Charles E. Merrill (1885–1956), one of the founders of Merrill, Lynch & Company. The town's spring is described by his son James Merrill in the poem "Two From Florida", published in The Inner Room (1988).

Locally, the community is known as the home of Gustafson's Farm, a brand name of milk and dairy products sold throughout Florida. The main Gustafson Dairy Farm is located in Green Cove Springs and is one of the largest privately owned dairy farms in the southeastern United States. Started in 1908, the main farm occupies nearly 10,000 acres (40 km2) adjacent to the city limits. Gustafson's has many bottling plants across the state, stretching from Tallahassee in the west to Tampa and Cocoa in the south. All Gustafson products have the picture of the husband-and-wife founders, Frank and Agnes Gustafson (also known as Mama and Papa Gus), who along with their first cow on their farm (named "Buttercup") are prominently featured on the packaging of the dairy's products.

Scenes for the 1971 "B" monster movie Blood Waters of Dr. Z (or Zaat) were filmed here. The movie was satirized on the television program Mystery Science Theater 3000. 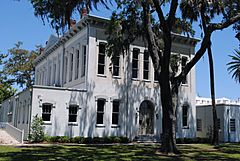 The following sites are listed on the National Register of Historic Places:

All content from Kiddle encyclopedia articles (including the article images and facts) can be freely used under Attribution-ShareAlike license, unless stated otherwise. Cite this article:
Green Cove Springs, Florida Facts for Kids. Kiddle Encyclopedia.