Starke is a city in and the county seat of Bradford County, Florida, United States. The population was 5,449 at the 2010 census.

Starke may have been named in honor of developer George W. Cole's fiancée or in honor of Madison Starke Perry, fourth governor of Florida and a Confederate States Army colonel. The Florida Department of State, Division of Historical Resources, adds that the city may have been named after "Thomas Starke, a slaveholder who once owned much land around the area."

According to the United States Census Bureau, the city has a total area of 7.2 square miles (18.7 km2), all land.

The Starke post office contains a mural, Reforestation, painted in 1940 by Elizabeth Terell. Murals were produced from 1934 to 1943 in the United States through the Section of Painting and Sculpture, later called the Section of Fine Arts, of the Treasury Department. The WPA was the largest and most ambitious American New Deal agency, employing individuals to carry out public works projects. 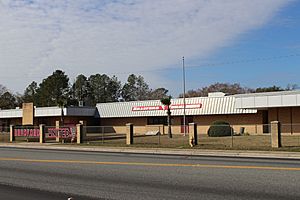 North Florida Technical College (Bradford-Union Technical Center), a tertiary institution managed by the school district, is in Starke. Santa Fe Community College's Andrews Center campus is located in the historic Old Bradford County Courthouse. The Romanesque style brick courthouse, with its restored yet original clock tower was constructed in 1902 and added to the U.S. National Register of Historic Places on December 27, 1974. The courthouse lies within the Call Street Historic District and is considered the center of downtown Starke.

All content from Kiddle encyclopedia articles (including the article images and facts) can be freely used under Attribution-ShareAlike license, unless stated otherwise. Cite this article:
Starke, Florida Facts for Kids. Kiddle Encyclopedia.