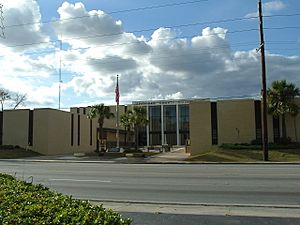 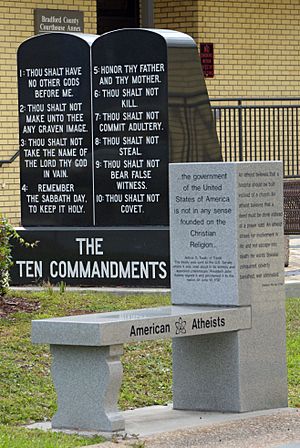 American Atheists bench and Ten Commandments display at the courthouse

Bradford County is a county in the U.S. state of Florida. As of the 2010 census, the population was 28,520. Its county seat is Starke. Bradford County is the home of the Florida State Prison as well as several other state correctional facilities. It is named after Richard H Bradford, a Confederate Captain who fought during the American Civil War.

New River County was created in 1858. It was renamed Bradford County in 1861. It was named for Captain Richard Bradford, who fought in the American Civil War and was killed in the Battle of Santa Rosa Island, becoming the first Confederate officer from Florida to die during the Civil War. Union County was carved out of Bradford in 1921.

All content from Kiddle encyclopedia articles (including the article images and facts) can be freely used under Attribution-ShareAlike license, unless stated otherwise. Cite this article:
Bradford County, Florida Facts for Kids. Kiddle Encyclopedia.