Union County is a county located in the north central portion of the U.S. state of Florida, the smallest in the state. As of the 2010 census, the population was 15,535. The county seat is Lake Butler. With a personal per capita income of $20,396 (as of 2017), it is the fourth-poorest county in the United States.

Union County was created in 1921 from part of Bradford County. It was named to honor the concept of unity. Union County is the location of Union Correctional Institution and the Reception and Medical Center (RMC). Union CI is a maximum security prison and is home to part of Florida's Death Row. The death chamber is located at nearby Florida State Prison (FSP) in Bradford County. Florida State Prison also houses some death-row inmates. 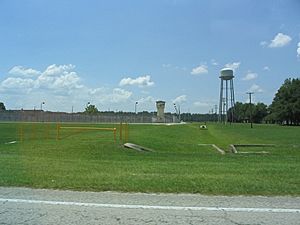 The Union Juvenile Residential Facility of the Florida Department of Juvenile Justice is in an unincorporated area in Union County.

The Union County Public Library serves the county. The branch is at 250 SE 5th Avenue, Lake Butler, Florida 32054. Its director is Mary C. Brown. The branch is open Monday, Wednesday–Friday 9 am–6 pm, Tuesday 9 am–8 pm, and Saturday 9 am–3 pm.

All content from Kiddle encyclopedia articles (including the article images and facts) can be freely used under Attribution-ShareAlike license, unless stated otherwise. Cite this article:
Union County, Florida Facts for Kids. Kiddle Encyclopedia.