Additionally, Camp Blanding serves as a training center for many ROTC units, both Army and Navy, as well as serving for the Florida Wing Summer Encampment for the Civil Air Patrol/US Air Force Auxiliary's Cadet Program each year. Jacksonville University and University of South Florida NROTC Battalions continue to conduct their week-long orientation at Camp Blanding each August before the college semester starts. Camp Blanding also hosts the Audie Murphy Field Training Exercise where Army ROTC units from more than a dozen Florida, Georgia, and Puerto Rican universities gather to conduct a five-day field problem focusing on small-unit tactics, land navigation, and leadership development every April.

Camp Blanding is the primary training site for most of the Florida National Guard's military units and the main combat arms brigade, the 53rd Infantry Brigade of the Florida Army National Guard. It is also home to the headquarters and support companies of the 3-20th Special Forces Group, the 211th Infantry Regiment, and the 2-111th Airfield Operations Battalion of the 111th Aviation Regiment.

In 2008, Camp Blanding became host to the Army's latest air assault course in response to the growing need for air assault-trained individuals for the continuing operations in Iraq and Afghanistan. Also, a bombing and strafing target for military aircraft, primarily used by the Navy, Marine Corps, and Air Force, is located on the southern portion of the post.

Camp Blanding is also home to the Combating Transnational Organized Crime Center of Excellence, which provides unique, tuition-free training in support of Department of Defense strategies, and has campuses on Camp Blanding, at St. Petersburg College in St. Petersburg, Florida, and on Camp Murray near Tacoma, Washington.

Camp Blanding owes its location on the shore of Kingsley Lake to the United States Navy's desire to establish a Naval Air Station (NAS) on the banks of the St. Johns River, south of Jacksonville, in the late 1930s. The site that would eventually become Naval Air Station Jacksonville was already the location of the Florida National Guard's Camp Foster and negotiations were started for a land-swap. In mid-1939, the transaction was accomplished and the state armory board chose as compensation a tract of 30,000 acres (120 km2) in Clay County as a National Guard camp and training site. The National Guard Officers Association of Florida recommended the new camp be named in honor of Lieutenant General Albert H. Blanding. The War Department agreed and Camp Blanding's history began.

Blanding graduated from the East Florida Seminary (now the University of Florida) in 1894 and entered military service. He commanded the 2nd Florida Infantry during the Mexican Border Service in 1916 and 1917. 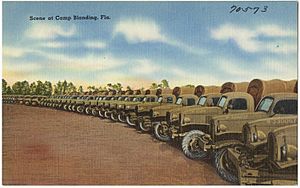 Army trucks lined up at Blanding, likely after 1940.

In 1940, Camp Blanding was leased to the United States Army as an active duty training center. The post was originally used by New England and Southern troops preparing for deployment overseas. However, during the course of the war, Camp Blanding served as an infantry replacement training center, an induction center, a German prisoner-of-war compound, and a holding center for 343 Japanese, German and Italian immigrant residents of the United States. At the height of the war, the Army leased acreage from local landowners, raising the total to 170,000 acres (690 km2). From 1940 to 1945, more than 800,000 soldiers received all or part of their training here. 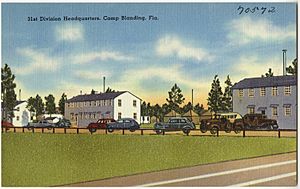 At one point during the war, the camp contained the population of the fourth largest city in Florida. There were 10,000 buildings, 125 miles (201 km) of paved roads, the largest hospital in the state. It was one of the largest training bases in the country.

After the war, the state's 30,000 acres (120 km2) were returned to the armory board and by 1948, most of the buildings were sold or moved off post. In the early 1950s, the Federal Government deeded additional land to the State of Florida for use as a National Guard training facility, but until 1970, the post saw only limited use by the military.

In the 1970s, an expansion program began upgrading post facilities and in 1981, the Department of Defense redesignated Camp Blanding as a Class A military installation. The designation qualified the post for use by greater numbers of troops with more diversified training.

In 1983, the 105 mm artillery firing points were used for the first time since World War II. Tank ranges were upgraded and Tank Tables I through VI can be fired. In addition to improved facilities and ranges, a parachute drop zone and an expeditionary airfield consisting of two gravel runways capable of accommodating C-130 Hercules aircraft have expanded Camp Blanding's training capacity. The U.S. Navy also utilizes an aerial bombing and strafing target in the southern portion of the post. Upgrading of Camp Blanding's facilities and training areas continues to this day.

Camp Blanding is also home to the Camp Blanding Museum and Memorial Park. Open to the public, the facility contains a history museum in one of Camp Blanding's restored World War II buildings, tracing the history of both Camp Blanding and the Florida National Guard. Outdoor exhibits and displays include equipment and Army, Navy and Air Force aircraft from World War II, the Korean War, the Vietnam War, the Cold War and Operation Desert Storm, including captured Soviet-manufactured Iraqi equipment from the latter conflict.

All content from Kiddle encyclopedia articles (including the article images and facts) can be freely used under Attribution-ShareAlike license, unless stated otherwise. Cite this article:
Camp Blanding Facts for Kids. Kiddle Encyclopedia.