Albert Hazen Blanding (November 9, 1876 – December 26, 1970) was a United States Army officer. Among the most distinguished military figures in Florida's history, he was a recipient of the Distinguished Service Medal.

Blanding was born in Lyons, Iowa, but his family moved to Florida when he was two years old. Blanding attended East Florida Seminary, now known as the University of Florida, in Gainesville, graduating in 1894. He was commissioned a captain in the Florida National Guard in 1899. At the time, he was a phosphate company executive. he advanced through the ranks in a variety of staff and command positions, receiving promotion to major in 1906 and lieutenant colonel in 1908.

Blanding was promoted to the rank of colonel in 1909 and ran a turpentine, sawmill, and lumber business from 1910 to 1914 while active on the National Guard roster. In the Pancho Villa Expedition, Blanding commanded the Second Florida Infantry.

On August 5, 1917, Blanding was called up to serve in World War I, where he commanded the 53rd Brigade, 27th Division, as a brigadier general.

In France, he commanded the 185th Infantry Brigade, which included the 370th Infantry Regiment from Illinois.

After hostilities ceased, he was awarded the Distinguished Service Medal and was discharged from the Army on March 1, 1919, after which he resumed his service to the Florida National Guard.

Blanding was the production manager of the Florida Citrus Exchange, and served a term as head of Florida's American Legion. and was a member of the Florida Board of Control from 1922 to 1936.

In 1924, he was promoted to Major General in the National Guard and commander of the 31st Infantry Division.

From 1936 to 1940, Blanding was Chief of the National Guard Bureau by appointment of President Franklin D. Roosevelt. He held this post while continuing to command the 31st Infantry Division.

At his 1940 retirement, Blanding received a state promotion to Lieutenant General in recognition of his service and accomplishments.

During World War II, Blanding was the Military Advisor to Florida's Governor. After the war, he was an advocate for the establishment of the Everglades National Park.

Blanding was a member of the Elks, the Kiwanias, and a Mason.

Blanding died December 26, 1970. He is buried in Evergreen Cemetery in Gainesville, Florida.

In 1939, he was honored by the establishment of a military station, Camp Blanding. A major Army training installation for World War II, it was later designated as the primary military reservation and training site for the Florida National Guard.

The University of Florida awarded him Doctor of Laws in May 1942. During World War II he served on the Florida Board of the Selective Service System and helped found Everglades National Park.

Blanding was designated a Great Floridian by the Florida Department of State in the Great Floridians 2000 Program. A plaque attesting to the honor is located at Bartow City Hall. 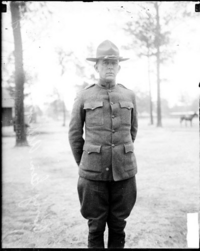 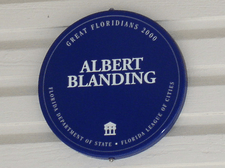 All content from Kiddle encyclopedia articles (including the article images and facts) can be freely used under Attribution-ShareAlike license, unless stated otherwise. Cite this article:
Albert H. Blanding Facts for Kids. Kiddle Encyclopedia.