Baldwin is a town in Duval County, Florida, United States. When the majority of communities in Duval County were consolidated with the city of Jacksonville in 1968, Baldwin, along with Jacksonville Beach, Atlantic Beach and Neptune Beach, remained partly independent. Like the other towns, it maintains its own municipal government, but its residents vote in the Jacksonville mayoral election and vote for the Jacksonville City Council; unlike the others, Baldwin no longer supports its own police force. The population was 1,425 at the 2010 census.

The town was first settled under the name of Thigpen in 1846. Mr. Thigpen had opened a tavern to benefit the stagecoach line at the crossroads of what is today Baldwin. He supplied horses for the stage and shelter and food for the passengers. The first railroad was built in Thigpen in 1857 with a second crossing it in 1859. The name was changed to Baldwin in honor of Dr. Abel Seymour Baldwin, the president of the Florida, Atlantic and Gulf Central Railroad, a railroad that ran from Lake City to Jacksonville. Further development in Baldwin led to the establishment of a telegraphic line running from Jacksonville to Baldwin. 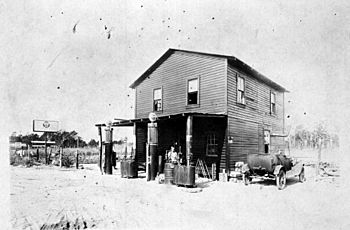 On August 10, 1864 during the Civil War a skirmish occurred between a Confederate cavalry and the 102nd Regiment United States Colored Troops. A section of railroad tracks were destroyed by the Federal troops. Two days later the Federals dispatched cavalry troops from Baldwin to drive Confederate forces back. One Federal soldier was killed and four were captured in the process. Baldwin was then burned down by the Federals. From 1865 to 1875 Baldwin was rebuilt reaching a population of 250.

In 1947, the original school building serving the white population burned to the ground. There was no fire department to control it, and it was completely destroyed. The students from the school were temporarily housed in a variety of public buildings, including churches and the city hall. Later, barracks buildings from nearby army training base Camp Blanding were moved to the site of the burned school, where classes continued for about two years while a new school was being built. A school for the black population was located in a building located near the old ice plant that served the railroad. The school was occupied for a number of years after the new white school was built.

In 1965 Baldwin became the first Duval County school to be integrated.

According to the United States Census Bureau, the town has a total area of 2.0 square miles (5.3 km2), all land.

There were 628 households, out of which 35.2% had children under the age of 18 living with them, 41.2% were married couples living together, 22.5% had a female householder with no husband present, and 31.2% were non-families. 27.5% of all households were made up of individuals, and 8.6% had someone living alone who was 65 years of age or older. The average household size was 2.60 and the average family size was 3.16.

No passenger trains stop in Baldwin, but Amtrak's Palmetto train served the Wildwood Subdivision until November 2004, and the Sunset Limited served the Tallahassee and Jacksonville Terminal Subdivisions until Hurricane Katrina ravaged the Gulf Coast in 2005. Additionally, the Jacksonville-Baldwin Rail Trail was a former Atlantic Coast Line Railroad line that was abandoned by CSX in 1992.

All content from Kiddle encyclopedia articles (including the article images and facts) can be freely used under Attribution-ShareAlike license, unless stated otherwise. Cite this article:
Baldwin, Florida Facts for Kids. Kiddle Encyclopedia.