The area around present-day Jacksonville Beach was first settled by Spanish settlers. Spanish missions were established from Mayport to St. Augustine. Spain ceded Florida to Great Britain by treaty in 1763, only to have Spain regain it again, and then a final time in 1821 to the United States. American river pilots and fishermen came to Hazard, present-day Mayport, and established a port. 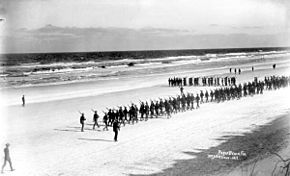 In the late 19th century, developers began to see the potential in Duval County's oceanfront as a resort. In 1883 a group of investors formed the Jacksonville and Atlantic Railroad with the intention of developing a resort community that would be connected to Jacksonville by rail. The first settlers were William Edward Scull, a civil engineer and surveyor, and his wife Eleanor Kennedy Scull. They lived in a tent two blocks east of Pablo Historical Park. A second tent was the general store and post office. On August 22, 1884, Mrs. Scull was appointed postmaster. Mail was dispatched by horse and buggy up the beach to Mayport, and from there to Jacksonville by steamer. The Sculls built the first house in 1884 on their tent site. The settlement was named Ruby for their first daughter. On May 13, 1886, the town was renamed Pablo Beach after the San Pablo River. In 1885, the San Pablo Diego Beach Land Co. sold town lots ranging from $50 to $100 each along with 5 to 10 acres (2.0 to 4.0 ha) lots from $10 to $20 per acre within 3 miles (4.8 km) of the new seaside resort "Pablo Beach". In September 1892, work on the wagon road to Pablo Beach (Atlantic Boulevard) was begun. The first resort hotel called the Murray Hall Hotel was established in mid 1886 but on August 7, 1890 it was destroyed in a fire. By 1900 the railway company began to have financial difficulties and Henry Flagler took over as part of his Florida East Coast Railway. In late 1900 the railway was changed to standard gauge and was extended to Mayport.

The Spanish–American War broke out in 1898. The 3rd Nebraska arrived July 22, 1898, for training and embarkation. They encamped at Pablo Beach. They were led by three-time presidential candidate, William Jennings Bryan. After flooding in the camp at Pablo Beach the 3rd Nebraska moved to downtown Jacksonville. 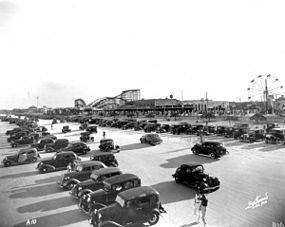 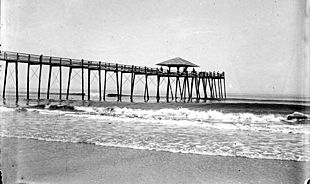 The amusement park phase of Jacksonville Beach began in 1905 with The Pavilion which was later expanded and called Little Coney Island. It was a popular tourist attraction that had such entertainment as a dance floor, swim room, bowling alley, and roller skate rinks. An issue with contracting and constant weathering of its wooden structure aged Little Coney Island causing it to be torn down in 1925. On June 15, 1925, the name Pablo Beach was changed to Jacksonville Beach. The Shad's Pier was created in 1922 by Charles Shad and with help by Martin Williams. Around the same time W. H. Adams, Sr. created the Ocean View Pavilion amusement park on the former site of the Murray Hall Hotel. Adams wanted to create a larger roller coaster than the one at Little Coney Island. His vision resulted in a 93-feet high coaster. The location of the coaster by the beach made it vulnerable to damage and was eventually deemed unsafe. The coaster was then deconstructed to a smaller coaster. The deconstruction of the larger coaster hurt business at the amusement park. By 1949 the Ocean View Pavilion was in decline and then a fire destroyed it a few years later. The only amusement park in Jacksonville Beach today is Adventure Landing. The boardwalk declined in the 1950s due to the crackdown on gambling and games of chance. Driving on the beach was prohibited in 1979.

Pablo Beach made aviation history on February 24, 1921, Lt. Wm. DeVoe Coney, in a transcontinental flight from San Diego, California, landed at Pablo Beach, having made the flight in 22 hours and 17 minutes, beating the old record, set two years earlier, by 3 hours and 32 minutes. Coney's record was soon eclipsed on September 5, 1922, by Jimmy Doolittle piloting a De Havilland DH-4 biplane from Pablo Beach to San Diego in an elapsed time of 21 hours and 19 minutes.

Hanna Park is a 1.5-mile (2.4 km) public beach and city park located near Mayport in the Jacksonville Beaches area. It consists of 447 acres (1.81 km2) of mature coastal hammock, and was formerly known as Manhattan Beach, Florida's first beach community for African Americans during the period of segregation in the United States.

There were 9,715 households, out of which 21.8% had children under the age of 18 living with them, 40.5% were married couples living together, 9.4% had a female householder with no husband present, and 46.4% were non-families. 34.6% of all households were made up of individuals, and 9.2% had someone living alone who was 65 years of age or older. The average household size was 2.13 and the average family size was 2.78. 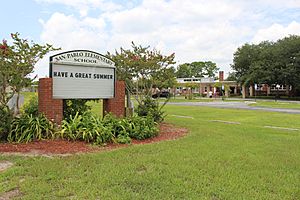 All content from Kiddle encyclopedia articles (including the article images and facts) can be freely used under Attribution-ShareAlike license, unless stated otherwise. Cite this article:
Jacksonville Beach, Florida Facts for Kids. Kiddle Encyclopedia.