The Jacksonville Beaches communities are all located on an unnamed barrier island defined by the Atlantic Ocean to the east, the St. Johns River to the north, and the Intracoastal Waterway to the west. The island was actually originally a peninsula until 1912, when a 10-mile channel was dug connecting the San Pablo and Tolomato Rivers, facilitating the Intracoastal Waterway and separating the land from the mainland. The island has no official name; beginning in the 21st century there has been a push to name it San Pablo Island.

The northernmost of the beach communities is Mayport, in Duval County. Since the consolidation of the Jacksonville and Duval County governments in 1968, Mayport has been within the city limits of Jacksonville. Most of Mayport is currently occupied by Naval Station Mayport, a major U.S. Navy base. Moving south along the coastline are three incorporated towns, also within Duval County: Atlantic Beach, Neptune Beach, and Jacksonville Beach. All three maintain their own municipal governments, however, residents receive county-level services from Jacksonville and vote for Jacksonville's mayor and City Council. Continuing south into St. Johns County is Ponte Vedra Beach. Typically, only the communities on the northern part of the island are considered the Beaches; areas to the south such as Vilano Beach are usually not included. The Palm Valley area of St. Johns County, much of which is also located on the island, is sometimes considered part of the Beaches.

The parts of Duval County on the other side of the Intracoastal are sometimes known as the West Beaches. Further inland are Jacksonville's Arlington and Southside areas. 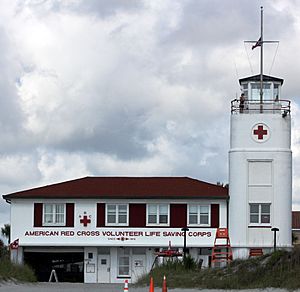 Mayport was the first part of the beaches to see any concentrated population growth, when a small community of fishermen and river pilots grew up there, especially following the U.S. purchase of Florida in 1821. However, the entire Beaches area remained very sparsely populated until the end of the 19th century, when they were developed as resorts. Jacksonville Beach, originally known as Ruby and then as Pablo Beach, grew around the series of luxury hotels built in the area. Further growth was facilitated by a railroad connecting the town to Jacksonville. Atlantic Beach also grew as a resort community around a large hotel, and smaller hotels were built at Mayport. Neptune Beach seceded from Jacksonville Beach in 1931 and incorporated as its own town.

Ponte Vedra Beach and Palm Valley remained much more rustic into the 20th century. Palm Valley, especially, mostly consisted of farmland. In 1914 mineral deposits were discovered at Ponte Vedra, after which point it grew as the town of Mineral City. Following World War I real estate development began in the area and the name was changed to Ponte Vedra Beach.

All content from Kiddle encyclopedia articles (including the article images and facts) can be freely used under Attribution-ShareAlike license, unless stated otherwise. Cite this article:
Jacksonville Beaches Facts for Kids. Kiddle Encyclopedia.