Lake City began as the town of Alligator in 1821 near the Seminole settlement known as Alligator Village. Alligator became the seat of Columbia County in 1832 when it was formed from Duval and Alachua counties. In 1858 Alligator was incorporated and renamed Lake City. The largest American Civil War battle in Florida took place near here in the Battle of Olustee in 1864; the Confederates won. In 1884 the Florida Agricultural College was established in Lake City as a land grant college; it was relocated to Gainesville in 1905 to form part of the University of Florida. The city's sesquicentennial was held in 2009.

Lake City is known as "The Gateway to Florida" because it is adjacent to the intersection of Interstate 75 and Interstate 10. The city is the site of Lake City Gateway Airport, formerly known as NAS Lake City. Florida Gateway College is located in Lake City. 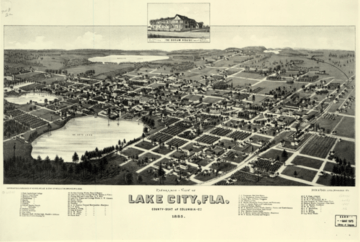 The site of Lake City was a Seminole village named Alpata Telophka or Hvlpvtv Tvlofv, meaning "Alligator Village". By 1830, a Euro-American town called Alligator was established, adjacent to the Seminole town. The city was incorporated and changed to its current name in 1859. The name was changed because the mayor's wife, who had recently moved to the town, refused to hang her lace curtains in a town named Alligator. Local bodies of water include Lake DeSoto, Lake Isabella, Alligator Lake, Lake Hamburg, Gwen Lake, Lake Harper and Watertown Lake.

Florida Agricultural College, one of the four schools that formed the University of Florida, was originally located in Lake City before consolidation to Gainesville in 1905.

By 1950, the population of Lake City was 7,467 people, and forestry (turpentine, lumber, and pulpwood) had become a mainstay of the local economy.

In 1958, the Columbia Amateur Radio Society was formed. This was a group of amateur radio operators that enjoyed the ability to communicate all over the world. This radio club still exists today.

Lake City's centennial was celebrated in 1959 with parades, fireworks and a 58-page book documenting one hundred years of progress, A Century in the Sun. The citizens of the town dressed in period attire, complete with whiskers. A good-natured clash arose between the men with additional facial hair and the women who did not like it.

Lake City has two historic districts listed on the National Register of Historic Places by the United States Department of the Interior. The Lake City Historic Commercial District is located in the downtown city core and was designated on June 6, 1994. The Lake Isabella Historic Residential District is located south of the main portion of town and was designated on November 15, 1993.

Mountaintop Ministries Worldwide, formerly End Time Ministries and commonly called End Timers, was established near Lake City by Charles Meade in 1984. The basis of the ministry was that Lake City would be the only place to survive Armageddon and believers were to stay in an underground bunker on Meade's property.

As of 2016 the largest self-reported ancestry groups in Lake City, Florida are:

Lake City is part of the humid subtropical climate zone of the Southeastern United States. Due to its latitude and relative position north of Florida's peninsula it is subject at times to continental conditions, which cause rare cold snaps that may affect sensitive winter crops. The hottest temperature ever recorded in the city was 106 °F (41 °C) on June 4, 1918, and the coldest temperature ever recorded was 6 °F (−14 °C) on February 13, 1899. 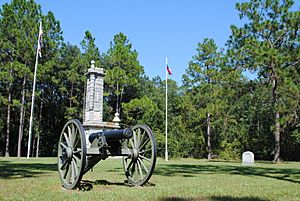 This festival at O'Leno State Park 20 miles (32 km) south of Lake City celebrates early 19th-century history, from 1800 to 1859, in north Florida, especially that of Alligator/Lake City and Newnansville/Alachua and is held each year on the weekend (Friday-Sunday) of the 3rd Saturday in October.

Lake City started out as the Seminole community of Alligator Village (Hvlpvtv Tvlofv) in Spanish Florida. Historians don't know when it was established, but its existence was documented by the U.S. Army in 1821. Spanish Florida had long been a place of freedom for slaves escaping from the British colonies and the United States. Also, many of the refugees from the Creek War moved to Spanish Florida to live among or near the Seminole, because they had been forced to surrender their land to the U.S. after the Treaty of Fort Jackson. A February 1821 report by Captain John H. Bell mentions that the recent death of the micco (chief) of Alligator Village prevented the micco's attendance at a gathering of chiefs. After Florida became a territory of the United States in 1821, pioneer and immigrant settlers from the United States formed their own settlement adjacent to Alligator Village and called it Alligator Town. Following the 1823 Treaty of Moultrie Creek, the residents of Alligator village relocated to the banks of Peace Creek in the newly established Seminole reservation, leaving Alligator Town on its own. When Columbia County was formed in 1832, Alligator Town became the seat of the county government. Alligator Town was renamed Lake City in 1859.

The most famous resident of Alligator Village was Alligator Warrior (Hvlpvtv Tvstvnvke). He was a son of a daughter of Micanopy (King) Payne (Mekk-Onvpv Pin) and led Seminole warriors in the Second Seminole War (1835–1842) to prevent the relocation of Florida's Indians to the Arkansas Territory (now known as Oklahoma). Although Alligator Warrior was certainly a leader of warriors, the U.S. military mistakenly referred to him as a chief because they did not understand Seminole culture.

The Alligator Warrior Festival tries to educate and entertain by demonstrating how Native American, European, African and mixed-descent settlers lived in early 19th-century Florida. Living-history reenactors portraying 1830s Seminoles, U.S. soldiers, pioneer militia and settlers give presentations in their period camps and reenact the September 18, 1836, Battle of San Felasco Hammock, which is the battle of the Second Seminole War that took place closest to O'Leno State Park. The festival also includes Native American musicians and dancers, a drum arbor with dance ground and teepee camp, as well as other musicians, demonstrators of early 19th-century skills such as blacksmithing, barrel making, spinning and weaving, and traders selling historic replicas, skillfully handcrafted arts, manufactured souvenirs, and food.

The first Alligator Festival was held in 1995 at Olustee Park in downtown Lake City. The event was not held from 2000 to 2001 while Olustee Park was being completely rebuilt. The renovated Olustee Park was no longer suitable for the event so it was held at Wilson Park from 2002 to 2003. Needing a larger space, it was held at Gateway College from 2003 to 2007. The organizational committee reorganized into a non-profit corporation in 2007. Then, for the city's sesquicentennial (150th) celebration in 2009, the event was held at the old memorial stadium because use of the college grounds became unaffordable. Starting in 2010 the annual festival has been held at O'Leno State Park, in Columbia County, where the appropriate facilities exist for a full-scale battle reenactment, historic camping and large crowds. 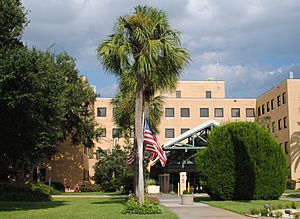 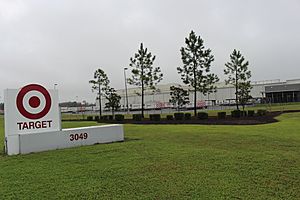 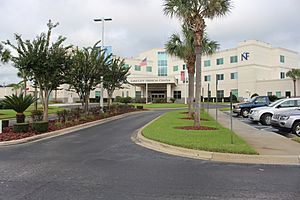 Lake City and Columbia County are known as "The Gateway to Florida" because Interstate 75 runs through them, carrying a large percentage of Florida's tourist and commercial traffic. Lake City is the northernmost sizable town/city in Florida on Interstate 75 and the location where I-10 and I-75 intersect. Interstate 10 is the southernmost east-west major interstate highway and traverses the country from Jacksonville, Florida, to Santa Monica, California. U.S. 41 and U.S. 90 (the U.S. highway versions of I-75 and I-10) have intersected in Lake City since 1927, long before the Interstate highways were built. The city relies on travelers for a considerable part of its economy.

Lake City is the location of the Osceola National Forest's administrative offices.

The top employers in the Lake City area are:

The Lake City Gateway Airport is a local center of business. The airport is classified as a general aviation facility, but two on-site operations are somewhat unusual. HAECO (formerly TIMCO) is an aircraft modification and rehabilitation operation for large (B-727, 737 and Airbus A-320 A-319) civilian and military aircraft. The U.S. Forest Service uses C-130 transport aircraft in support of its forest fire-fighting operations in the southeastern United States.

Lake City was a scheduled stop for Amtrak's Sunset Limited between Los Angeles and Orlando from 1993 to 2005, when damage to railroad lines and bridges by Hurricane Katrina caused the curtailment of all service east of New Orleans,

All content from Kiddle encyclopedia articles (including the article images and facts) can be freely used under Attribution-ShareAlike license, unless stated otherwise. Cite this article:
Lake City, Florida Facts for Kids. Kiddle Encyclopedia.