The Central Florida Zoo and Botanical Gardens is a 116-acre (47 ha) zoo and botanical garden located north of Orlando, Florida in Sanford. As a not-for-profit organization, it is a leader in conservation, providing experiences that inspire actions on behalf of wildlife. The Zoo has been an accredited member of the Association of Zoos and Aquariums (AZA) since 1986. 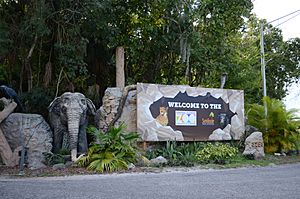 Entrance to the Central Florida Zoo

In 1923, the Central Florida Zoo (then called the Sanford Municipal Zoo) opened its gates for the first time with only a small collection of animals that were donated by the local fire department. In 1941, it was relocated to new facilities where Sanford City Hall now stands. It was moved to its current location on July 4, 1975.

With the support from a group of dedicated citizens, and the donation of a 106-acre piece of land from Seminole County, the Central Florida Zoological Park opened at its current location along Lake Monroe, with Jack Hanna as Director. In 1986 the Central Florida Zoo became accredited by the Association of Zoos and Aquariums (AZA). In 2005, The Wayne M. Densch Discovery Center and ZooLab opened. The buildings feature classroom and hands-on instructional space, as well as a multi-purpose banquet room available for private meeting and event rentals. In 2007, the Zoo officially announced its botanical garden status and became the Central Florida Zoo and Botanical Gardens. The same year, the Wharton-Smith Tropical Splash Ground opened.

The Zoo is now home to over 350 animals, representing over 100 species. Guests can take advantage of educational opportunities including keeper chats and animal encounters.

Within the Zoo, a small carousel can be found, as well as the Little Florida Coast Line, a 16 in (406 mm) gauge ridable miniature railway with a G-16 streamliner locomotive that was originally built in 1951. The Zoo also has a splash park within the Zoo. Giraffe feedings and rhino encounters are available for an extra cost.

The Zoo hosts several annual events, including ZOO Boo Bash and Hippity Hop Adventure. Brews Around the Zoo, a 21 & up only event occurs yearly in the spring. In 2019, the Inaugural Asian Lantern Festival: Into the Wild, was held at the Central Florida Zoo. In partnership with Tianyu Arts & Culture, 35 hand crafted illuminated lantern elements transformed the Zoo and more than 38,000 guests took part in the event.

The Central Florida Zoo has teamed up with The Florida Fish and Wildlife Conservation Commission's Fish and Wildlife Research Institute (FWC/FWRI) and the Florida Museum of Natural History to monitor the state's 68 species of amphibians and help save the 16 species considered to be at greatest risk due to habitat loss, invasive species, climate change, and new wildlife diseases. The Zoo also participates in several AZA Species Survival Plans (SSP), including those for the cheetah, ruffed lemur, Amur leopard, guenon, spider monkey, cotton-top tamarin, rock iguana, and clouded leopard.

The Zoo also operates an offsite conservation center, the Orianne Center for Indigo Conservation. This facility helps to breed and release eastern indigo snakes into the wild where they have disappeared.

All content from Kiddle encyclopedia articles (including the article images and facts) can be freely used under Attribution-ShareAlike license, unless stated otherwise. Cite this article:
Central Florida Zoo and Botanical Gardens Facts for Kids. Kiddle Encyclopedia.