Kids Encyclopedia Facts
This page is about a region in the United States. For other uses, see Central Florida (disambiguation).

Central Florida is a region of the U.S. state of Florida. Different sources give different definitions for the region, but as its name implies it is usually said to comprise the central part of the state, including the Tampa area and the Orlando area. It is one of Florida's three directional regions, along with North Florida and South Florida. It includes the following counties: Brevard, Citrus, Flagler, Hardee, Hernando, Hillsborough, Indian River, Lake, Manatee, Marion, Orange, Osceola, Pasco, Pinellas, Polk, Seminole, Sumter, and Volusia.

Like many vernacular regions, Central Florida's boundaries are not official or consistent, and are defined differently by different sources. A 2007 study of Florida's regions by geographers Ary Lamme and Raymond K. Oldakowski found that Floridians surveyed identified Central Florida as comprising a large swath of peninsular Florida. This area encompassed the interior, including the Orlando metropolitan area, and coastal stretches from the Big Bend south to the Tampa Bay Area in the west and from Daytona Beach south to Martin County in the east. In addition, North Central Florida has emerged as a vernacular region representing the interior area in the northern part of the state.

Central Florida is one of Florida's three most common directional regions, the others being North Florida and South Florida. Lamme and Oldakowski note that the directional region is more commonly used in the interior areas rather than on the coast. In fact, while coastal areas often have their own regional vernacular identities such as the Space Coast and the Nature Coast, no vernacular regions were reported on the interior of the state other than Central Florida.

Enterprise Florida, the state's economic development agency, identifies "Central Florida" as one of eight economic regions used by the agency and other state and outside entities, including the Florida Department of Transportation. This definition covers much of the same area as in Lamme and Oldakowski's survey, with some exceptions. It excludes the Tampa Bay Area and North Central Florida, as well as the southern coastal counties (the Treasure Coast, which is included in "Southeast" or "South Florida"). The Central region includes the Orlando metropolitan area (Orange, Lake, Osceola, and Seminole Counties), Marion and Sumter Counties in the interior, and Volusia and Brevard Counties on the coast.

The central cities of both metropolitan areas (Orlando and Tampa) are in close proximity (85 miles (137 km)), and as a result, their two metropolitan areas blend together in the area of Lakeland to make up a larger contiguous population center often referred to as the I-4 corridor. This is a population concentration that stretches from Tampa Bay on the west coast to Daytona Beach and Cape Canaveral on the east coast of the state.

With the exception of hill terrain in southern Lake County, Hernando County, Pasco County and Polk County, Central Florida is mostly flatland with significant amounts of open space and over 1,500 lakes and ponds. There is a mixture of wetlands, Cypress, Oak, Maple and Pine forests, pastures, prairies and coastline.

Hurricanes are a threat to the coastal cities as evident by the 2004 hurricane season, which brought three major hurricanes to the Central Florida area: Charley, Jeanne, and Frances.

Winters are dry and temperate with the average winter high temperature in Orlando being 72 °F (22 °C). Summers are hot and humid with high temperatures averaging 92 °F (33 °C). Peak summer heat generally arrives in early June and continues to early October.

The combination of high temperatures, high humidity, and opposing sea breezes from both the Gulf and Atlantic coasts, results in significant thunderstorm activity from June to September for the interior counties. Central Florida records more lightning strikes per area than any other region in Florida, and Florida records more lightning strikes than any other state in the USA. As a result, Florida, and more specifically, Central Florida, is often referred to as the "Thunderstorm capital of the USA", or "Lightning Alley".

These severe thunderstorms often make Central Florida prone to many tornadoes. However, they are usually small, short lived, and almost always rated as EF0 or EF1 size storms.

At the end of the Civil War most of Central Florida was barely-inhabitable wetlands. It took a major drainage project financed by Philadelphia businessman Hamilton Disston in the 1880s to make the land available for settlement.

Sanford was incorporated in 1877 as port city at the intersection of Lake Monroe and the St. Johns River. It was envisioned as a transportation center, the city's founder, Henry S. Sanford, nicknamed it "the Gate City of South Florida". It became a hub for shipping agricultural products, which earned the city another nickname, "Celery City".

Kissimmee boomed in the 1880s. It was the headquarters of Hamilton Disston's drainage company, The city was an important regional steamship port, owing that status to its location on Lake Tohopekaliga. The expansion of the railroads into Central Florida eliminated the need for Kissimmee's steamship industry.

The Great Freeze of 1894-95 ruined citrus crops which had a detrimental ripple effect on the economy.

The hard-packed sand of Volusia County's beaches lent itself to auto races beginning in 1903, before paved roads were common, leading to the area's reputation for cars and racing. Ormond Beach was a popular spot for those who liked fast cars after the turn of the 20th century because the hard-packed beach was ideal for going fast. That same beach had led to the development of a tourist resort by Henry Flagler. It later attracted Flagler's former business partner John D. Rockefeller, who had a winter home in Ormond.

During and after World War II, the U.S. Army Air Forces (U.S. Air Force after 1947) and the U.S. Navy established several training facilities and operational bases in the region, mainly aviation activities, later followed by space exploration sites. In the late 1940s, the US military established a missile testing facility on Merritt Island near Cape Canaveral because the land was largely undeveloped and the agreeable climate allowed for year-round operations. When NASA later searched for a long-term base in the 1960s from which to launch spacecraft, they chose the adjacent Merritt Island site next to Cape Canaveral for its access to the testing facility and to nearby communities. NASA purchased over 100,000 acres (400 km2) of land for the Kennedy Space Center.

Deltona was developed in 1962 as a planned retirement community. It is now the largest city in Volusia County.

The construction of the Walt Disney World Resort was a transforming event for greater Orlando. Walt Disney wanted a location with abundant available land that was more accessible for the residents of the eastern United States to visit. Not only was there ample land in Central Florida, but it was inexpensive and the inland location offered some protection from hurricanes. Plans were announced in 1965, and the theme park opened to the public in 1971.

Politically, while North Florida overwhelmingly was considered conservative and South Florida was considered more liberal, the majority of Central Florida residents (52%) considered their area moderate; 41% considered it conservative, and 7% liberal. Lamme and Oldakowski's survey tracks with Barney Warf and Cynthia Waddell's studies of Florida's political geography during the 2000 Presidential election. Central Florida's economy is very similar to that in South Florida. Compared to the more diversified North Florida economy, tourism is by far the most significant industry in Central and South Florida, along with a much smaller but significant agricultural industry.

Port Canaveral, located in Cape Canaveral 45 minutes east of Orlando, is a cruise, cargo, and naval port. It is one of the busiest ports in Florida and is economically tied to Orlando. Locally perceived to be Orlando's seaport, Port Canaveral is the closest port for tourists and Orlando residents alike to cruise on Disney Cruise Lines and Carnival Cruises. Future plans for the port include a rail and natural gas line running directly to Orlando International Airport.

A regional commuter rail network is being developed in Central Florida. The first of these initiatives, SunRail, is a commuter rail line that will run from DeLand south to Kissimmee. The first phase should be complete by 2013 with the full system in place by 2015. Amtrak also serves Central Florida running on CSX Transportation's A line and stops at the Orlando Amtrak station. The Auto Train stops in Sanford, Florida, north of downtown Orlando.

A High Speed Rail line was in the planning stages at one point during the years of 2009-2011, however, that plan was eventually canceled by the Governor of Florida, Rick Scott, after a cost analysis of the project. The train line had been planned to run from the Orlando International Airport to downtown Tampa; with future lines eventually connecting to downtown Orlando, Jacksonville, and Miami. 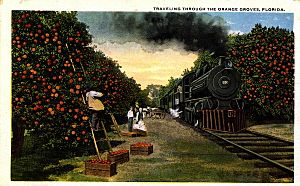 Tourism is a large contributor to Central Florida's economy.

The area has economically diversified in the past decade. As a high-tech industrial hub, Metro Orlando has the seventh largest research park in the U.S., Central Florida Research Park, the engineering and business school of the University of Central Florida. It has defense companies such as Lockheed Martin and Siemens.

Medical research is conducted in Orlando's Lake Nona area with the University of Central Florida medical school, the Sanford-Burnham Medical Research Institute biomedical research facility and a new Veterans Administration hospital. These facilities, along with several research support companies, have led this research cluster to be referred to as Medical City. In 2012, an estimated 400,000 veterans lived in ten of the counties of Central Florida. A $665 million Veterans Administration hospital was being built in Lake Nona. Completion was scheduled for 2013.

The Tampa Bay area has become a center of high-tech manufacturing and research, while both Orlando and the Tampa Bay area are centers for the financial industry, especially insurers and back-end operations for large banking companies. 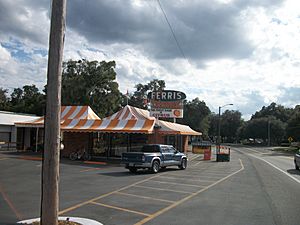 Ferris Groves Store in Floral City, one of many Old Florida style citrus stands found on the back roads of Central Florida. 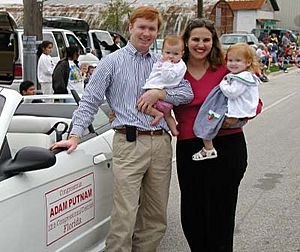 Plant City Strawberry Festival, Congressman Putnam with wife Melissa and their daughters at the Strawberry Parade in Plant City, Florida,

Active military installations in Central Florida include Patrick Space Force Base and Cape Canaveral Space Force Station located on the Atlantic coast; MacDill Air Force Base, Coast Guard Air Station Clearwater and Coast Guard Sector St. Petersburg on the Gulf Coast; and Naval Support Activity Orlando, the Navy Pinecastle Impact (Bombing) Range, and the Avon Park Air Force Range located inland. These are augmented by major commands that are tenant activities at these installations, such as the headquarters for United States Central Command (USCENTCOM) and the headquarters for United States Special Operations Command (USSOCOM) at MacDill AFB, the Naval Ordnance Test Unit and Coast Guard Station Port Canaveral at Cape Canaveral SFS, and other Active, Reserve, Army National Guard, and Air National Guard activities that are located as either stand-alone facilities or as tenants on the active duty installations. 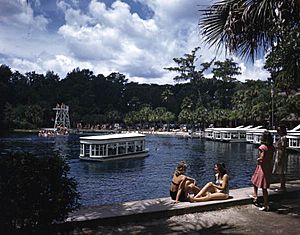 Silver Springs in Ocala is one of the many natural springs and lakes found in Central Florida. 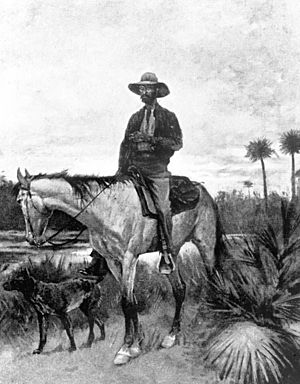 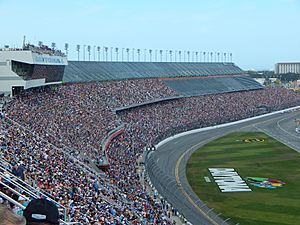 Daytona International Speedway on the day of the Daytona 500 in Central Florida.

Florida's public primary and secondary schools are administered by the Florida Department of Education.

All content from Kiddle encyclopedia articles (including the article images and facts) can be freely used under Attribution-ShareAlike license, unless stated otherwise. Cite this article:
Central Florida Facts for Kids. Kiddle Encyclopedia.