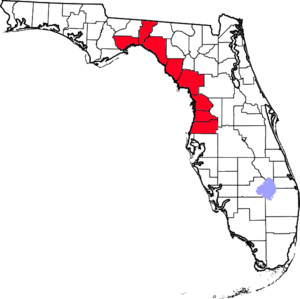 Many businesses and organizations incorporate "Nature Coast" in their names, but most of them do not explicitly define the region, or define a smaller region. For instance, the Nature Coast State Trail, which is officially designated as part of Florida’s Statewide System of Greenways and Trails, is located in Dixie, Gilchrist and Levy counties. The Nature Coaster website covers only Citrus, Hernando and Pasco counties.

This region of Florida is culturally partially southern, with the Deep South culture extending to Levy County. The lower southern end (Pasco, Hernando, and Citrus County) are often considered part of the Tampa Bay Area.

The name "Nature Coast" was devised in 1991 as part of a marketing campaign to attract vacationers to the eight county area. The name eventually began to be used locally, and describes the area formally known as the "Big Bend" of Florida.

Activities common in this area include hunting, fishing, boating, bird watching and nature hiking. Snorkeling spots are found in the rivers along the Nature Coast. Diving and manatee tours are available, predominantly in areas such as Crystal River, Homosassa and Homosassa Springs.

There are also 50 golf courses in the area.

All content from Kiddle encyclopedia articles (including the article images and facts) can be freely used under Attribution-ShareAlike license, unless stated otherwise. Cite this article:
Nature Coast Facts for Kids. Kiddle Encyclopedia.