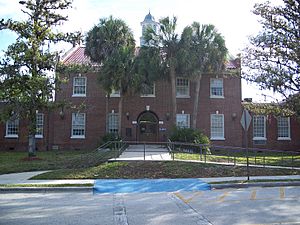 Levy County is a county located on the Gulf coast in the northern part of the U.S. state of Florida. As of the 2010 census, the population was 40,801. Its county seat is Bronson.

Levy County was created in 1845, after the Seminole Wars. It was named for David Levy Yulee, a planter elected in 1841 as the state's territorial delegate to the US House of Representatives, where he served two terms. When Florida was admitted as a state, Levy was elected by the new state legislature as one of Florida's first two U.S. senators; he served from 1845 to 1851, and again from 1855 to 1861. He was the first Jewish American elected to the United States Senate.

Levy provided for long-term development in the state by constructing the first railroad across Florida, the Florida Railroad, linking the deep-water ports of Fernandina (Port of Fernandina) on the Atlantic Ocean and Cedar Key on the Gulf of Mexico. He developed a network of feeder railroads through central Florida as well. For his efforts, he was called "the father of Florida railroads."

On April 7, 2008, Progress Energy Florida of St. Petersburg announced it had authorized Shaw and Westinghouse to purchase long-lead-time materials for up to two AP1000 nuclear reactors for its Levy County plant, a greenfield plant in Levy County, producing about 1,100 MW each.

Progress expects to apply for a Combined Construction and Operating License (COL) in the summer of 2008, according to a spokeswoman. Southern Company and SCANA, of whom each own an interest in the plant, would not reveal cost estimates, but Progress has said its plant will cost $14 billion, with $3 billion more for transmission infrastructure.

Applying for a COL does not commit the utilities to construct the plant, but it is part of the licensing process, say officials of all the utilities. The application starts a 40-month review by the Nuclear Regulatory Commission, meaning that approval could come in August 2011.

In late July, 2013 the company said it had scrapped its plan to build the plant.

Levy County has only one railroad line running throughout the county, and only within eastern Levy along US 41. The line is a former Atlantic Coast Line Railroad line that is now used by the Florida Northern Railroad for freight to the Crystal River 3 Nuclear Power Plant in Red Level, Citrus County. Notable abandoned lines include a Seaboard Air Line Railroad line that is in proximity to the existing former ACL line, a Florida Railway and Navigation Company line running parallel to State Road 24, and a third in western and southern Levy County that spans from Fanning Springs towards the Dunnellon area running along US 19-98 until it reaches Lebanon Junction, where it runs along CR 336. The segment of that line between Fanning Springs and Chiefland is part of the Nature Coast State Trail.

All content from Kiddle encyclopedia articles (including the article images and facts) can be freely used under Attribution-ShareAlike license, unless stated otherwise. Cite this article:
Levy County, Florida Facts for Kids. Kiddle Encyclopedia.