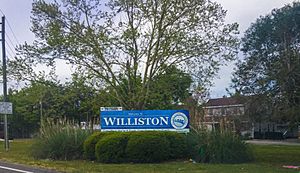 Williston is a city in Levy County, Florida, United States. As of the 2010 census it had a population of 2,768. The city was established before 1885 by J.M. Willis, who named it after himself.

There were 836 households, out of which 31.8% had children under the age of 18 living with them, 42.9% were married couples living together, 22.0% had a female householder with no husband present, and 30.6% were non-families. 25.6% of all households were made up of individuals, and 12.7% had someone living alone who was 65 years of age or older. The average household size was 2.56 and the average family size was 3.03.

The area includes Two Tails Ranch, an exotic animal refuge specializing in elephants. Kirby Family Farm, an educational farm open to the public, is also in the Williston area and features the Great America Railway, its own 3 ft (914 mm) narrow gauge railroad for its guests to enjoy.

The climate in this area is characterized by hot, humid summers and generally mild to cool winters. According to the Köppen Climate Classification system, Williston has a humid subtropical climate, abbreviated "Cfa" on climate maps.

Williston is home to Devil's Den and Blue Grotto, popular diving spots and part of the extensive underground spring system present in the area.

Williston is the birthplace of Foolish Pleasure, winner of the 1975 Kentucky Derby.

All content from Kiddle encyclopedia articles (including the article images and facts) can be freely used under Attribution-ShareAlike license, unless stated otherwise. Cite this article:
Williston, Florida Facts for Kids. Kiddle Encyclopedia.