Chiefland is a city in Levy County, Florida, United States. The population was 2,245 at the 2010 census. Chiefland calls itself the "Gem of the Suwannee Valley" and was incorporated in 1929.

A village of the Timucua people was once located south of the present city and at Manatee Springs. The area's economy was traditionally based on agriculture, primarily farming (peanuts, watermelons, hay); ranching (cattle, hogs); dairy (milk); timber (pulpwood, lumber, turpentine) and aquaculture (fishing, oystering, crabbing).

Manatee Springs State Park is located 6 miles (10 km) west of town; the crystal-clear water is a "first-magnitude" spring that flows directly into the Suwannee River. The park offers a full slate of activities, including camping. Manatees can be seen in the spring year-round, but especially in late fall and winter, where the constant 72 °F (22 °C) temperature of the spring is much warmer than river water.

There were 796 households, out of which 35.7% had children under the age of 18 living with them, 36.1% were married couples living together, 23.4% had a female householder with no husband present, and 35.8% were non-families. 32.2% of all households were made up of individuals, and 15.5% had someone living alone who was 65 years of age or older. The average household size was 2.45 and the average family size was 3.05.

According to the United States Census Bureau, the city has a total area of 16.1 square miles (42 km2), all land. 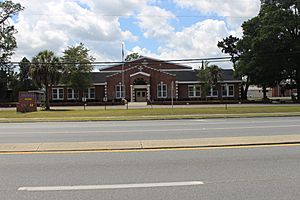 Chiefland has two public schools: Chiefland Middle High School, and Chiefland Elementary. The School Board of Levy County controls their operation and also supervises two charter schools: Nature Coast Middle School and Whispering Winds. Other schools under the board's jurisdiction are in the town of Bronson, the city of Williston, the city of Cedar Key, and Yankeetown.

The College of Central Florida has plans for a $12 million permanent facility on 35 acres (14 ha) of donated land by the Mann family. The location is 5 miles (8 km) north of the city. The college currently operates the Levy Center in downtown Chiefland. The new location has been designated the Jack Wilkinson Levy Campus in honor of the former high school math teacher's donation of $2.5 million to the campus.

All content from Kiddle encyclopedia articles (including the article images and facts) can be freely used under Attribution-ShareAlike license, unless stated otherwise. Cite this article:
Chiefland, Florida Facts for Kids. Kiddle Encyclopedia.