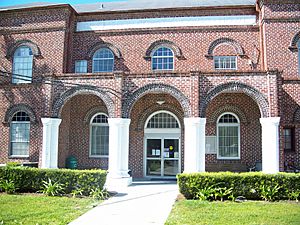 Gilchrist County is a county located in the north central part of the U.S. state of Florida. Organized in 1925 from the western part of Alachua, it is the last county to be formed in the state. As of the 2010 census, the population was 16,939. The county seat is Trenton.

Gilchrist County was created in 1925, making it the youngest county in Florida. It was named for Albert W. Gilchrist, Governor of Florida from 1909 to 1913.

Historic buildings in Gilchrist County include:

The Trenton State Farmer's Market is located on State Road 47, north of Trenton.

All content from Kiddle encyclopedia articles (including the article images and facts) can be freely used under Attribution-ShareAlike license, unless stated otherwise. Cite this article:
Gilchrist County, Florida Facts for Kids. Kiddle Encyclopedia.