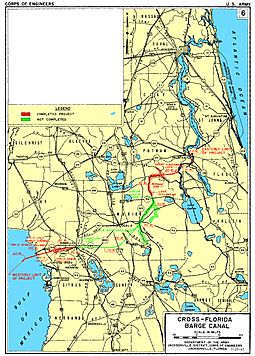 Map of the area, highlighting the Cross Florida Greenway

Inglis is a town in Levy County, Florida, United States. It is on U.S. Highway 19 near the Cross Florida Greenway. As of the 2010 census, the town had a population of 1,325.

There were 670 households, out of which 22.2% had children under the age of 18 living with them, 49.0% were married couples living together; 8.2% had a female householder with no husband present; and 36.3% were non-families. 31.0% of all households were made up of individuals, and 15.2% had someone living alone who was 65 years of age or older. The average household size was 2.23 and the average family size was 2.70.

"Satan, ruler of darkness, giver of evil, destroyer of what is good and just, is not now, nor ever again will be, a part of this town of Inglis."

"As the mayor of Inglis, duly elected by the citizens of this town, and appointed by God to this position of leadership, I proclaim victory over Satan, freedom for our citizens, and liberty to worship our Creator and Heavenly Father, the God of Israel. I take this action in accordance with the words of our Lord and Savior, Jesus Christ, as recorded in Matthew 28:18–20 and Mark 16:15-18."

This controversial proclamation garnered national and world attention. The American Civil Liberties Union accused the town of what they alleged was a clear violation of the separation of church and state. In addition, the proclamation was placed on wooden posts that were installed at the entrances to the town on public rights of way. After much controversy and the threat of lawsuits, the town later rescinded its proclamation, and the mayor reimbursed the town for the use of government stationery. The wooden posts were relocated to private property.

All content from Kiddle encyclopedia articles (including the article images and facts) can be freely used under Attribution-ShareAlike license, unless stated otherwise. Cite this article:
Inglis, Florida Facts for Kids. Kiddle Encyclopedia.