Homosassa is a census-designated place (CDP) in Citrus County, Florida, United States. The population was 2,578 at the 2010 census.

Homosassa is derived from a Seminole Indian name meaning either "river of fishes" or "pepper ridge".

In 1851, David Levy Yulee established a 5,000-acre (20 km2) sugar plantation on the Homosassa River, close to the current town of Homosassa. The plantation was worked by approximately 1,000 slaves, but Yulee was an absentee owner, spending most of his time in Fernandina. Among the crops raised were sugar cane, cotton and citrus. The Yulee Groves were one of the first in Florida to grow sweet oranges budded from sour orange stock. The mill, which was steam-driven, operated from 1851 to 1864 and produced sugar, syrup and molasses, the last of which was part of the rum-making process. After the Civil War ended in 1865, Yulee was imprisoned, the slaves were freed and the site was abandoned. The remains of the plantation are preserved at the Yulee Sugar Mill Ruins Historic State Park.

Homosassa is home to Homosassa Springs Wildlife State Park, which is often home to large numbers of "migratory" manatees, which frequent the area due to its springs and relatively warm waters. The park is home to Lu, a famous hippopotamus known for his performances in many movies for the past 40 years. The park also hosts an underwater viewing platform, known as the "fish bowl", where visitors can see manatees and fish swimming in the large spring from which the Homosassa River begins. The Wildlife Park helps spread awareness about the dangers of boating around areas inhabited by manatees as well as the destructive effects of polluting the environment. The park is one of the few major attractions of the area, which has a large retiree population and a very low level of activity compared to major tourist regions of Florida. The Homosassa and Halls rivers run through the area, and it is fairly common to see manatees surface near the area's waterfront restaurants and bars. 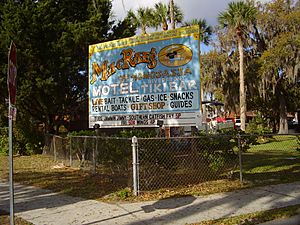 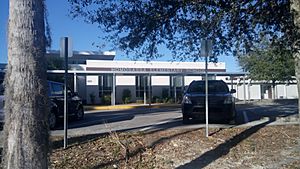 All content from Kiddle encyclopedia articles (including the article images and facts) can be freely used under Attribution-ShareAlike license, unless stated otherwise. Cite this article:
Homosassa, Florida Facts for Kids. Kiddle Encyclopedia.