Edward Ball Wakulla Springs State Park is a Florida State Park in Wakulla County, Florida, United States. This 6,000 acre (24 km2) wildlife sanctuary, located south of Tallahassee, is listed on the National Register of Historic Places, and designated a National Natural Landmark. It has three nature trail systems which lead the visitor through pine forests, bald cypress wetlands and hardwood hammock. Hikers, bicyclists and horse riders are welcome. The wildlife found in the forest includes white-tailed deer, wild turkey, and many other bird species, while American alligators, bass, gar, various snakes, and West Indian manatee (during the winter) populate the springs, swamps, and river. 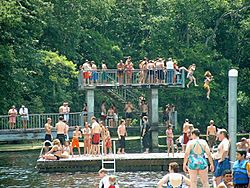 The park draws its name from Edward Ball, the DuPont family financial manager who sold the park lands to the state of Florida.

The park contains Wakulla Springs, one of the world's largest and deepest first-order freshwater springs and an exit point of the Floridan Aquifer. Wakulla Springs' highest outflow has been measured at 860,000 U.S. gallons per minute (54 m3/s). The spring's average flow is about 400,000 US gallons per minute (25 m3/s). The opening of the spring is 180 feet (55 m) down, through which cave divers, especially those of the Woodville Karst Plain Project have explored many miles of its underwater tunnels. The spring gives rise to Wakulla River which flows several miles to the south where it empties into the Gulf of Mexico. 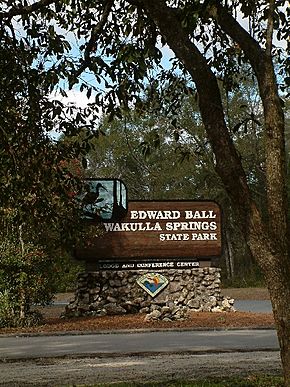 Entrance to the park turning off from 550 Wakulla Park Drive

Paleo Indians are known to have camped at the spring 12,000 years ago, where they hunted mastodons, bison, and other ancient animals. The bottom of the spring bowl is littered with bones of mastodons, giant sloths, giant armadillos, and camels. Glass bottom boat tours of the spring and river operate all year.

Sally Ward Spring and Cherokee Sink are located within the Park, while Leon Sinks Geological Area is nearby and part of the same karst system.

The Park contains the Wakulla Springs Lodge, which functions as a hotel.

All content from Kiddle encyclopedia articles (including the article images and facts) can be freely used under Attribution-ShareAlike license, unless stated otherwise. Cite this article:
Edward Ball Wakulla Springs State Park Facts for Kids. Kiddle Encyclopedia.