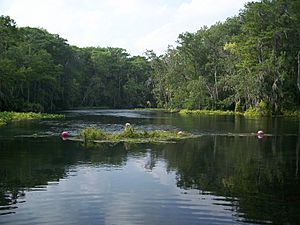 The Silver River from within the park.

In 1985, the State of Florida purchased about 5,000 acres of undeveloped land around Silver Springs to keep it from being developed. The land was turned over to the Department of Recreation and Parks in 1987, creating the Silver River State Park. The same year, Marion County Schools constructed the Silver River Museum and Environmental Education Center on the property. Little else was at the park until 1999, when the state began construction on a ranger station, campground, and kayak launch.

Also, a colony of non-native rhesus macaques were introduced to the park in early 1938 by a tour boat operator, known locally as "Colonel Tooey", to enhance his "Jungle Cruise" ride. A local legend that they are the descendants of monkeys used to enhance the scenery for the Tarzan movies that were shot in the area in the 1930s is not true, since no Tarzan movie filmed in the area featured rhesus macaques. The monkeys are allowed to live in Florida, due to their contributions to science.

The diversity of this waterway is among the highest in Florida. Since becoming part of the Florida state park system, the increased interest and reduced barriers to entry have brought many new visitors to the park. The damage to the river grasses and wildlife is a real concern.

Silver Springs, located in the park, drains into the Silver River, a 4.5-mile (7.2 km) stream that flows east from the springs to the Ocklawaha River. 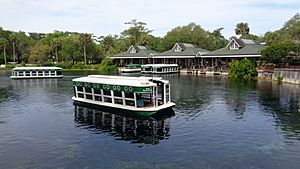 Glass-bottom boats are located within the park and are based at the site of the former Silver Springs Nature Theme Park.

Other activities include bicycling, canoeing, kayaking, camping, and wildlife viewing. Amenities include a museum and an environmental center that are open on weekends and major holidays. The park has 15 miles (24 km) of trails, access to the Silver River, 10 luxury cabins, and a 59-site, full-facility campground.

The Silver River Museum and Environmental Education Center, with educational facilities, is run by the Marion County Public School System in cooperation with the Florida Park Service. The center has a village of restored or "newly built" 19th-century farm buildings (houses, meeting house, sheds, blacksmith, etc.) and a museum on the natural and social history of the area. Used during the week by the school district for classes, on the weekends, it is open to the public. One week, early in November, the center also puts on the Ocali County Days as a fund raiser. This is a 19th-century, living history event with displays, talks, and performances incorporating living historians. For that Tuesday through Friday, it is open to public, private, and home schooled children and their teachers, who have made reservations with the center. The event is open to the general public on Saturday and Sunday and has become a popular annual attraction in the area.

The park is open from 8:00 am till sundown year round. The gate remains open until 10:00 pm on Fridays for campers.

All content from Kiddle encyclopedia articles (including the article images and facts) can be freely used under Attribution-ShareAlike license, unless stated otherwise. Cite this article:
Silver Springs State Park Facts for Kids. Kiddle Encyclopedia.