Kids Encyclopedia Facts
This page is about the community in Florida. For other uses, see Silver Springs.

Silver Springs is an CDP in Marion County, Florida, United States. It is the site of Silver Springs, a group of artesian springs and a historic tourist attraction that is now part of Silver Springs State Park. The community is part of the Ocala metropolitan area.

One of Florida's first tourist attractions, the springs drew visitors even before the U.S. Civil War. Glass-bottom boats have been a popular way to see the 242-acre (98 ha) complex. A small amusement park with various animals, a concert stage, a carousel, and exhibits also developed. 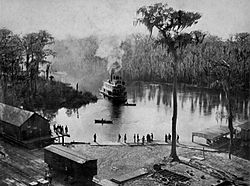 Steamboat and railroad at Silver Springs in 1886.

Silver Springs was founded in 1852.

Since the mid-19th century, the natural environment of Silver Springs has attracted visitors from throughout the United States. Glass-bottom boat tours of the springs began in the late 1870s. In the 1920s, W. Carl Ray and W.M. "Shorty" Davidson, after leasing the land from Ed Carmichael (upon whose death the springs were left to the University of Florida), developed the land around the headwaters of the Silver River into an attraction that eventually became known as Silver Springs Nature Theme Park. The attraction featured native animal exhibits, amusement rides, and 30 or 90-minute glass-bottom boat tours of the springs. The 1934 'Princess Donna' is the oldest and only remaining operational boat from this by gone era. The "Princess Donna" currently operates on Jug Creek in Bokeelia Florida. In 2013, the State of Florida took over operations of Silver Springs and combined it with the adjacent Silver River State Park to form the new Silver Springs State Park. The T. W. Randall House on the National Register of Historic Places is located to the northeast. 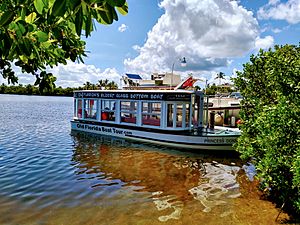 Silver Springs was "whites only" until 1967. From 1949 to 1969, African Americans were served by nearby Paradise Park, Florida, which closed when Silver Springs integrated racially.

Canadian billionaire Frank Stronach has been building the Adena Springs Ranch for cattle, an abattoir, residential property development, and a thoroughbred horse farm in the area, stirring concern over plans for water use and how groundwater draw will affect the springs.

The main road through Silver Springs is State Road 40 which runs east and west from Rainbow Lakes Estates to Ormond Beach in Volusia County. State Road 326 terminates at SR 40, as does State Road 35, which becomes County Road 35 north of SR 40 before terminating at SR 326. County Roads 314 and 314A are also important north-south county roads that run west and into the Ocala National Forest.

Six Gun Territory was a Western-themed theme park in Silver Springs. It opened on February 2, 1963 and closed on January 1, 1984.

All content from Kiddle encyclopedia articles (including the article images and facts) can be freely used under Attribution-ShareAlike license, unless stated otherwise. Cite this article:
Silver Springs, Florida Facts for Kids. Kiddle Encyclopedia.