The rhesus macaque (Macaca mulatta) is one of the best-known species of Old World monkeys. It is listed as Least Concern in the IUCN Red List of Threatened Species in view of its wide distribution, presumed large population, and its tolerance of a broad range of habitats. It is native to South, Central, and Southeast Asia and has the widest geographic range of all non-human primates, occupying a great diversity of altitudes and a great variety of habitats, from grasslands to arid and forested areas, but also close to human settlements. 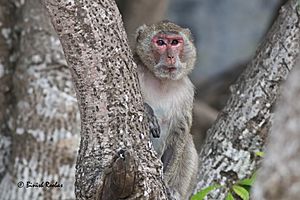 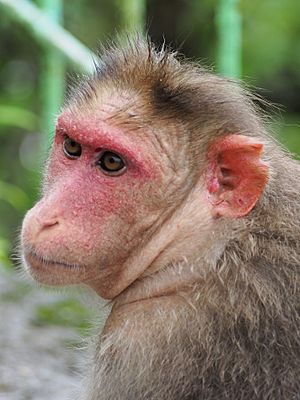 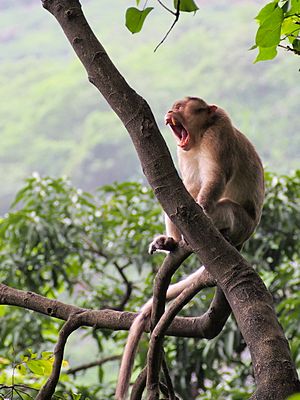 Rhesus macaques are native to India, Bangladesh, Pakistan, Nepal, Burma, Thailand, Afghanistan, Vietnam, southern China, and some neighboring areas. They have the widest geographic ranges of any non-human primate, occupying a great diversity of altitudes throughout Central, South, and Southeast Asia. Inhabiting arid, open areas, rhesus macaques may be found in grasslands, woodlands, and in mountainous regions up to 2,500 m (8,200 ft) in elevation. They are regular swimmers. Babies as young as a few days old can swim, and adults are known to swim over a half mile between islands, but are often found drowned in small groups where their drinking waters lie. Rhesus macaques are noted for their tendency to move from rural to urban areas, coming to rely on handouts or refuse from humans. They adapt well to human presence, and form larger troops in human-dominated landscapes than in forests.

The southern and the northern distributional limits for rhesus and bonnet macaques, respectively, currently run parallel to each other in the western part of India, are separated by a large gap in the center, and converge on the eastern coast of the peninsula to form a distribution overlap zone. This overlap region is characterized by the presence of mixed-species troops, with pure troops of both species sometimes occurring even in close proximity to one another. The range extension of rhesus macaque – a natural process in some areas, and a direct consequence of introduction by humans in other regions – poses grave implications for the endemic and declining populations of bonnet macaques in southern India.

Distribution of subspecies and populations 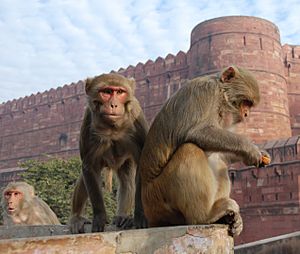 Rhesus macaques in the Red Fort of Agra in India 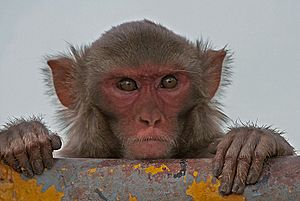 The name "rhesus" is reminiscent of the mythological king Rhesus of Thrace, a minor character in the Iliad. However, the French naturalist Jean-Baptiste Audebert, who applied the name to the species, stated: "it has no meaning".

According to Zimmermann’s first description of 1780, the rhesus macaque is distributed in eastern Afghanistan, Bangladesh, Bhutan, as far east as the Brahmaputra Valley in peninsular India, Nepal, and northern Pakistan. Today, this is known as the Indian rhesus macaque M. m. mulatta, which includes the morphologically similar M. rhesus villosus, described by True in 1894, from Kashmir, and M. m. mcmahoni, described by Pocock in 1932 from Kootai, Pakistan. Several Chinese subspecies of rhesus macaques were described between 1867 and 1917. The molecular differences identified among populations, however, are alone not consistent enough to conclusively define any subspecies. 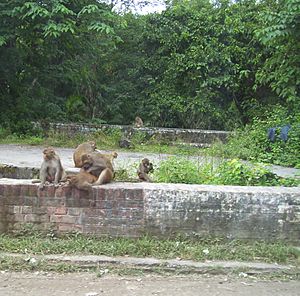 A roadside band of rhesus macaque in Rishikesh, Uttarakhand, India: Although they are infamous as urban pests, which are quick to steal not only food, but also household items, it is not certain if the pair of jeans draped over the wall on the right is their handiwork.

Rhesus macaques are diurnal animals, and both arboreal and terrestrial. They are quadrupedal and, when on the ground, they walk digitigrade and plantigrade. They are mostly herbivorous, feeding mainly on fruit, but also eating seeds, roots, buds, bark, and cereals. They are estimated to consume around 99 different plant species in 46 families. During the monsoon season, they get much of their water from ripe and succulent fruit. Macaques living far from water sources lick dewdrops from leaves and drink rainwater accumulated in tree hollows. They have also been observed eating termites, grasshoppers, ants, and beetles. When food is abundant, they are distributed in patches, and forage throughout the day in their home ranges. They drink water when foraging, and gather around streams and rivers. Rhesus macaques have specialized pouch-like cheeks, allowing them to temporarily hoard their food.

In psychological research, rhesus macaques have demonstrated a variety of complex cognitive abilities, including the ability to make same-different judgments, understand simple rules, and monitor their own mental states. They have even been shown to demonstrate self-agency, an important type of self-awareness. In 2014, onlookers at a train station in Kanpur, India, documented a rhesus monkey, knocked unconscious by overhead power lines, that was revived by another rhesus that systematically administered a series of resuscitative actions. 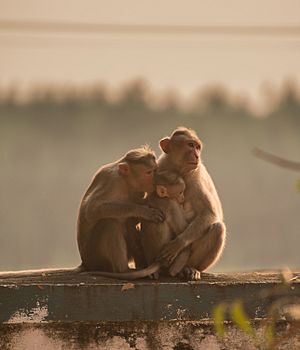 Like other macaques, rhesus troops comprise a mixture of 20–200 males and females. Females may outnumber the males by a ratio of 4:1. Males and females both have separate hierarchies. Female philopatry, common among social mammals, has been extensively studied in rhesus macaques. Females tend not to leave the social group, and have highly stable matrilineal hierarchies in which a female’s rank is dependent on the rank of her mother. In addition, a single group may have multiple matrilineal lines existing in a hierarchy, and a female outranks any unrelated females that rank lower than her mother. Rhesus macaques are unusual in that the youngest females tend to outrank their older sisters. This is likely because young females are more fit and fertile. Mothers seem to prevent the older daughters from forming coalitions against her. The youngest daughter is the most dependent on the mother, and would have nothing to gain from helping her siblings in overthrowing their mother. Since each daughter had a high rank in her early years, rebelling against her mother is discouraged. Juvenile male macaques also exist in matrilineal lines, but once they reach four to five years of age, they are driven out of their natal groups by the dominant male. Thus, adult males gain dominance by age and experience.

In the group, macaques position themselves based on rank. The "central male subgroup" contains the two or three oldest and most dominant males which are codominant, along with females, their infants, and juveniles. This subgroup occupies the center of the group and determines the movements, foraging, and other routines. The females of this subgroup are also the most dominant of the entire group. The farther to the periphery a subgroup is, the less dominant it is. Subgroups on the periphery of the central group are run by one dominant male, of a rank lower than the central males, and he maintains order in the group, and communicates messages between the central and peripheral males. A subgroup of subordinate, often subadult, males occupy the very edge of the groups, and have the responsibility of communicating with other macaque groups and making alarm calls. Rhesus social behaviour has been described as despotic, in that high-ranking individuals often show little tolerance, and frequently become aggressive towards non-kin.

Rhesus macaques interact using a variety of facial expressions, vocalizations, body postures, and gestures. Perhaps the most common facial expression the macaque makes is the "silent bared teeth" face. This is made between individuals of different social ranks, with the lower-ranking one giving the expression to its superior. A less-dominant individual also makes a "fear grimace", accompanied by a scream, to appease or redirect aggression. Another submissive behavior is the "present rump", where an individual raises its tail and exposes its genitals to the dominant one. A dominant individual threatens another individual by standing quadrupedally and making a silent "open mouth stare" accompanied by the tail sticking straight. During movements, macaques make coos and grunts. 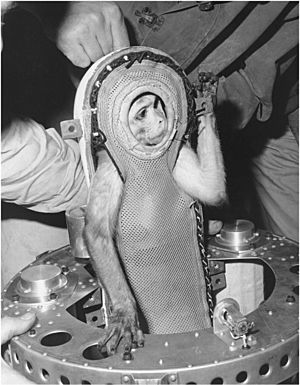 The rhesus macaque is well known to science. Due to its relatively easy upkeep in captivity, wide availability, and closeness to humans anatomically and physiologically, it has been used extensively in medical and biological research on human and animal health-related topics.

All content from Kiddle encyclopedia articles (including the article images and facts) can be freely used under Attribution-ShareAlike license, unless stated otherwise. Cite this article:
Rhesus macaque Facts for Kids. Kiddle Encyclopedia.