Fun Spot America Theme Parks is a group of amusement parks. Since 1979, the group has owned and operated a number of small amusement parks over the years and currently has three locations in Orlando, Florida, Kissimmee, Florida, and Fayetteville, Georgia.

Fun Spot America Theme Parks began in 1979 under the name Fun N Wheels near the I-Drive tourist corridor in Orlando, Florida. This 3 acre park near Wet 'n Wild Orlando, with no frontage on the main roads, had an arcade, three go-kart tracks, a miniature golf course, bumper cars and boats, Raging Riptide (a 40 foot high water slide) and a 55-foot Ferris wheel. This park became the world's first themed action park, premiering new types of rides such as the riptide slide manufactured by New Wave Rides. In 1988 a second Fun N Wheels location was opened in Kissimmee next to the regional mall. Both locations were sold in 1988 to Pleasurama USA, who also owned Hard Rock Café at the time, with the expectation of expanding the concept to malls region wide. This however did not occur. 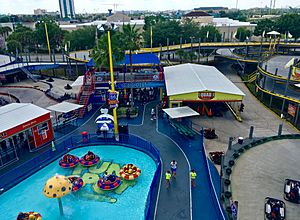 The Original Area of what was Fun Spot Action Park, as seen in 2016

In 2004, Fun Spot purchased the site of the world's tallest Skycoaster located in Kissimmee, adjacent to the Old Town entertainment and shopping complex. The site was purchased from Bill Kitchen, the inventor of the Skycoaster and owner of Skyventure. The site also included a recently opened G-Force dragster ride. Fun Spot developed the 9 acres around the skycoaster into another amusement park call Fun Spot USA in 2007 (now Fun Spot America - Kissimmee). They added 2 multi-level go-kart tracks, family/thrill rides and an arcade. Summer of 2011 saw the arrival of Fun Spot's first major roller coaster, the Power Trip Coaster at the Kissimmee park (now Rockstar Coaster). The Wild Mouse roller coaster, manufactured by Zamperla, was relocated from Cypress Gardens, where it was known as Galaxy Spin, when Cypress Gardens closed and became Legoland Florida. 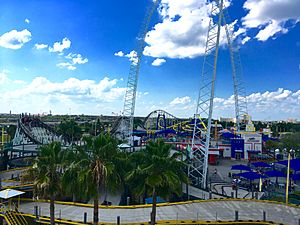 In 2010 Fun Spot purchased an additional 10 acres of vacant land next to their Orlando location. 2011 was spent researching nearly 30 parks and 50 rollercoaster across the country planning a major expansion of the park. Late in 2011, they meet with three professional roller-coaster salesmen. Ground was broken in 2012 for the expansion that tripled the size of Fun Spot Action Park, turning it into Fun Spot America - Orlando. $25 million was spent on two new roller coasters, the world's second tallest Skycoaster (second only to their Kissimmee location), and numerous other attractions. The two coasters are the wooden out and back roller coaster White Lightning, and the steel Suspended Family Coaster Freedom Flyer. The skycoaster came from MGM Grand Adventures in Las Vegas, where it had been disassembled in storage for 8 years. It is now the centerpiece of the park. Additional improvements include three new thrill rides, new multi-level go-kart track new food court, new ticket booth, additional parking and rest rooms. A grand re-opening was held on June 8, 2013, celebrating the tripling of size of the park, and the park's 15th anniversary. 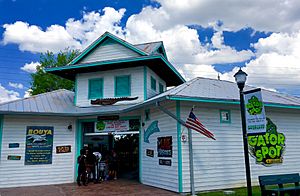 Fun Spot, in collaboration with Gatorland, opened Gator Spot at the Orlando park on May 11, 2015. The $1 million attraction allows Gatorland to extend their brand to the I-Drive tourist area, with visitors able to hold, take photos with, and feed alligators. The star of the attraction is a leucistic alligator named Bouya, a white gator with blue eyes.

Fun Spot America – Kissimmee is located in Kissimmee, Florida, adjacent to the Old Town entertainment and shopping complex. The park is designed as a circular walkway around the lagoon featuring the world's tallest skycoaster, the entrance of which is on the west side of the lagoon. The south end of loop features the signature multi-level go-kart tracks, the east side the flat slick tracks. In the north east side of the loop is the Arcade and Kiddie Area and the Rockstar Coaster is at the north end of the loop.

Fun Spot America – Atlanta is located on Highway 85 in Fayetteville, Georgia. Originally opened as Dixieland Fun Park in 1990. Then in 2012, they changed their name to Fun Junction USA. The park was purchased in 2017 by Fun Spot America.

All content from Kiddle encyclopedia articles (including the article images and facts) can be freely used under Attribution-ShareAlike license, unless stated otherwise. Cite this article:
Fun Spot America Theme Parks Facts for Kids. Kiddle Encyclopedia.