Cypress Gardens was a botanical garden and theme park near Winter Haven, Florida that operated from 1936 to 2009. As of 2011, the botanical garden portion had been preserved inside the newly formed Legoland Florida. 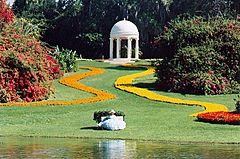 The Gazebo and a Southern belle of Cypress Gardens

Billed as Florida's first commercial tourist theme park, Cypress Gardens opened on January 2, 1936 as a botanical garden planted by Dick Pope Sr. and his wife Julie. Over the years it became one of the biggest attractions in Florida, known for its water ski shows, gardens, and Southern Belles.

It became known as the "Water Ski Capital of the World" because it was the site of many of the sport's landmark firsts and over 50 world records were broken there. During World War II, soldiers visited and waterskiing was introduced for their entertainment. Numerous movies were filmed at the park, including portions of This is Cinerama, the first feature filmed in the wide-screen format, and a string of Esther Williams films and TV specials in the 1950s and 1960s.

In the 1950s the Southern Belles attraction was introduced, in which young women dressed in the crinolines reminiscent of the Antebellum South. During the American Civil War Centennial young men dressed in Confederate uniforms would be photographed with the Southern Belles. In the early 1960s a custom photography boat named Miss Cover Girl was introduced, and the park became a popular site for the filming of television commercials.

Many celebrities and dignitaries have skied and visited at the park, including Elvis Presley, King Hussein of Jordan and his son and successor, King Abdullah II. It was also the site of a Johnny Carson special.

On April 14, 2014, it was added to the National Register of Historic Places.

On January 15, 2010, the world's second largest theme park and attraction operator Merlin Entertainments bought Cypress Gardens with intent to use the site for the fifth Legoland. On January 21, 2010, Merlin Entertainments announced that the park would be turned into Legoland Florida. On October 21, 2010, an October 2011 opening date was announced. Opening day occurred on October 15, 2011 at 10 am EDT.

All content from Kiddle encyclopedia articles (including the article images and facts) can be freely used under Attribution-ShareAlike license, unless stated otherwise. Cite this article:
Cypress Gardens Facts for Kids. Kiddle Encyclopedia.