Built on the site of the former Cypress Gardens theme park, Legoland preserved the botanical gardens and re-themed the water park and select attractions and venues to reflect various Lego brands.

On January 15, 2010, Merlin Entertainments declared its intention to build a Legoland theme park on the site of the old Cypress Gardens theme park. Six days later, a news conference was held with Florida Governor Charlie Crist and park officials. 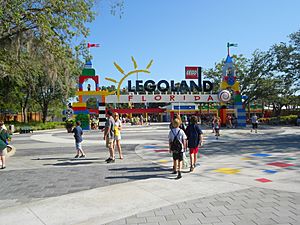 More than 50 rides, shows, and attractions are featured in the park based on those at other Legoland parks. The Jungle Coaster ride from Legoland Windsor was moved to the park and renamed Test Track (later renamed again to Project X). Cypress Gardens' botanical park was preserved as part of the park. Also surviving is a vast Banyan tree that was planted as a seedling in a five-gallon bucket in 1939. The Splash Island Waterpark was kept and is a separately ticketed admission. In addition, 4 attractions originally from Cypress Gardens were renovated and renamed: the Triple Hurricane wooden rollercoaster, the Okeechobee Rampage family coaster, and Swamp Thing, a Vekoma family inverted coaster. The Starliner coaster, formerly of the Miracle Strip Amusement Park in Panama City, was dismantled for sale. The Island in the Sky ride was also kept and updated for 2011.

The park has 11 sections: 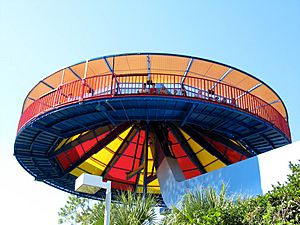 Island in the Sky 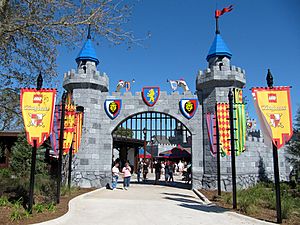 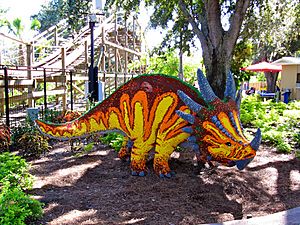 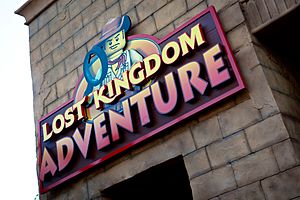 The World of Chima 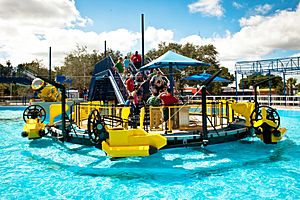 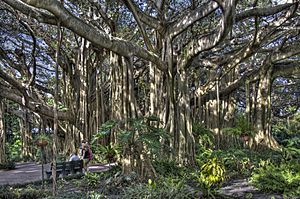 All content from Kiddle encyclopedia articles (including the article images and facts) can be freely used under Attribution-ShareAlike license, unless stated otherwise. Cite this article:
Legoland Florida Facts for Kids. Kiddle Encyclopedia.