Six Flags Over Georgia is a 290-acre (120 ha) theme park located west of Atlanta in Cobb County, Georgia, United States. Featuring characters and themes from a variety of Warner Bros. properties such as Looney Tunes and DC Comics, the park opened to the public in 1967 as the second of three theme parks built by Six Flags. It features 11 roller coasters, including top-ranked Mind Bender and Goliath that have been recognized annually by Amusement Today, and over 30 other rides, shows, and attractions. Hurricane Harbor, a 7-acre (2.8 ha) water park included in the price of admission to the amusement park, was added in 2014. 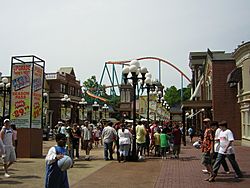 After the success of his original Six Flags park in Arlington, Texas, park founder Angus Wynne began searching for a location for a second park. He settled upon a parcel of land located along the Chattahoochee River just west of the city of Atlanta and design work started in 1964. As the park opened in 1967, Six Flags became the first multi-gate theme park operator in the United States.

Like its sister park in Texas and others, the initial design and theming of Six Flags Over Georgia was inspired by six different flags that have flown over the lands that have comprised present-day Georgia during its history. The six flags at the Georgia park are those of Spain, France, the United Kingdom, the Confederacy, the United States, in the state of Georgia. Over the years most of the original historical themes have been dropped in favor of cartoon and superhero themes.

Six Flags Over Georgia is not wholly owned by Six Flags Entertainment Corp. In an arrangement similar to that for Six Flags Over Texas, it is owned by a group of investors, Six Flags Over Georgia Ltd. (L.P.) and is managed by the corporation. As of 2018, the corporation owned 31% of the limited partnership. In years past, this has caused significant friction, including legal action. When the park was managed by Time Warner Entertainment, the limited partnership sued Time Warner in 1997, claiming it had neglected to invest in the park and overcharged the partners for the improvements it did receive. A Gwinnett County civil court jury agreed and awarded the partners damages in excess of US$600 million. In 1998, Time Warner sold its interests in the Six Flags parks to Premier Parks of Oklahoma City, which later changed its name to Six Flags Theme Parks, Inc.

In late 2010, Six Flags began the process of removing licensed theming from attractions. Several licenses were terminated including the license with Thomas the Tank Engine. Thomas Town was renamed and rethemed to Whistlestop Park in time for the 2011 season.

On August 29, 2013, Six Flags officially announced it would add a Hurricane Harbor water park next door to the park for the 2014 season. In late April 2014, the park announced that it will expand their season from October to January, to include the new Christmas event, Holiday in the Park for years to come.

As part of Six Flags' 2015 capital investment program, Six Flags Over Georgia received two rides in its Gotham City section. The first, "The Joker: Chaos Coaster" is a Larson Giant Loop ride approximately 70 feet in height, while the second, "Harley Quinn Spinsanity", is a more traditional Tilt-A-Whirl family ride. Both attractions are part of a broader renovation of Gotham City, which will also include a new character meet-and-greet area and improvements to the existing Gotham City Eatery restaurant.

In 2016, Six Flags added two new children areas to the park – "Bugs Bunny Boomtown" and "DC Super Friends", the first in the Six Flags chain. On June 16, 2016, it was announced that Dodge City Bumper Cars would be closed and removed from the park to make room for a new ride in 2017. On September 1, 2016, the park announced that an all new dark ride named Justice League: Battle For Metropolis would replace Dodge City Bumper Cars.

All content from Kiddle encyclopedia articles (including the article images and facts) can be freely used under Attribution-ShareAlike license, unless stated otherwise. Cite this article:
Six Flags Over Georgia Facts for Kids. Kiddle Encyclopedia.