SkyScreamer is an amusement ride located at several Six Flags theme parks in North America. Designed by Funtime, an Austrian ride manufacturer, the attraction is one of their "Star Flyer" models. Since 2011, Six Flags has installed SkyScreamers in ten of their parks.

Riders aboard SkyScreamer are carried aloft in two-person swing-like chairs attached to a rotating gondola mounted on a central tower. When the gondola reaches the top of the tower, riders are swung in a wide circle at speeds approaching 43 miles per hour (69 km/h), with expansive views of the adjacent countryside. The ride is marketed to both thrill-ride enthusiasts and patrons seeking a more family-friendly experience.

In July 2012, Six Flags New England submitted plans to the city of Agawam, Massachusetts requesting special approval to construct a 385-foot-tall (117 m) Star Flyer ride, as the proposed height exceeded the city's height limit. The approval was granted a week later, with an additional conditional approval to build as tall as 410 feet (125 m), in case a competing park built a taller model first. The planning documents revealed that the ride would replace the park's Skycoaster, "Taz's Dare Devil Dive" as well as the former spot of "Catapult".

However, when Six Flags announced its 2013 capital investments in August 2012, the Six Flags New England Star Flyer was not included. Instead, two other parks, Six Flags Over Texas and Six Flags Over Georgia, were set to receive SkyScreamer attractions. Six Flags Over Georgia's 242-foot (74 m) version replaced the Wheelie and officially debuted on May 24, 2013, after two weekends of passholder previews. Six Flags Over Texas' model, dubbed the Texas SkyScreamer, was awarded the title of the "world's tallest swing carousel ride" by Guinness World Records. Although reports suggested it took this record from the 117-metre-tall (384 ft) Prater Turm in Vienna, Austria, Eclipse at Gröna Lund actually held the record for a period of a month standing at 120 metres (390 ft), 3 metres (9.8 ft) shorter than the Texas SkyScreamer.

As part of its 2015 attractions presentation on August 28, 2014, Six Flags announced that Six Flags Mexico will be the next park to receive a SkyScreamer, a 242-foot (74 m) model and the only attraction of its kind in Latin America.

Two years later after the announcement of Six Flags Mexico addition, Six Flags announced that they would be adding yet another Funtime Star Flyer for the 2017 season after a hiatus of building the swing ride back to back. Six Flags America announced on September 1, 2016, that for the following season they would be constructing the tallest ride in the park, Wonder Woman Lasso of Truth a 242-foot (74 m) SkyScreamer. The ride would become one of the first SkyScreamers to be themed to a DC Comics character. Six Flags Mexico rethemed their SkyScreamer to Supergirl in 2018 to be a part of the new theme area the tower was already located in.

On August 30, 2018, Six Flags announced the Six Flags SkyScreamer. The 242-foot-tall ride is set to open in May of 2019 at the newly-renamed Six Flags Darien Lake, as Six Flags has recently re-purchased the operating lease for Darien Lake. The ride is set to be the tallest ride in New York State. The current holder of said title is the park’s Ride of Steel roller coaster. 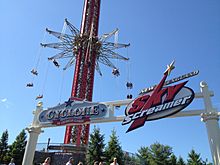 While the heights of the various SkyScreamer installations vary from park to park, the basic operation of the ride is consistent. Riders sit in one of 16 two-seat chairs connected to a gondola mounted on a central tower, which brings the gondola up and down. A seat belt is placed over the rider's waist to keep them firmly in their seat, and a lap bar is fastened into place. When the ride cycle begins, the gondola rises to the top of the tower, beginning to spin slowly around the central tower and picking up speed as it ascends further. By the time it reaches the top, it rotates around the tower at its full speed of approximately 43 miles per hour (69 km/h), with riders rotating around the tower in a circle 98 feet (30 m) in diameter. The gondola remains at the top of the tower for a period of time, then it descends and slows down slightly before returning to the top. At the end of the cycle, the gondola lowers to the ground and slows its rotation such that, by the time it reaches the bottom of the tower, all rotation ceases and the riders are able to depart. Optionally, SkyScreamer can be set to rotate in the opposite direction during its cycle, such that riders are traveling backwards. Thus far, the installations at St. Louis, Discovery Kingdom, Fiesta Texas, New England and La Ronde have operated in this manner, with each running them in this mode during special events or as a limited-time promotion.

The New England SkyScreamer and Texas SkyScreamer differ from the standard models, although the actual ride experience is intended to be the same. The gondola of the two rides hold 12 two-seat chairs instead of 16. When the gondola reaches full height, the chairs rotate in a larger circle—124 feet (38 m)—but at a slower speed—35 miles per hour (56 km/h).

All rides were installed by Ride Entertainment Group, who handle all of Funtime's operations in North America.

All content from Kiddle encyclopedia articles (including the article images and facts) can be freely used under Attribution-ShareAlike license, unless stated otherwise. Cite this article:
SkyScreamer Facts for Kids. Kiddle Encyclopedia.