Marineland of Canada facts for kids 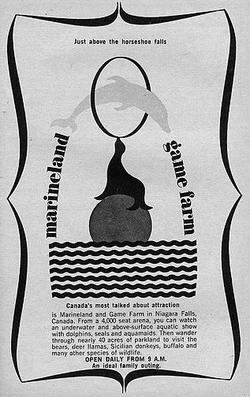 A 1967 flyer for Marineland, using the older name "Marineland and Game Farm"

Marineland (official name Marineland of Canada Inc.), is a themed zoo and amusement park in Niagara Falls, Ontario, Canada. The park has performing marine animal shows, sea mammal and land animal exhibits, and amusement rides. It keeps dolphins, walruses, sea lions, an orca, and beluga whales. The park also keeps bears, deer and other land animals. It was founded and operated by John Holer, a Slovenian immigrant, from 1961 until his death in 2018. It is privately owned-and-operated by his family.

In 2020, however, the facility did not open in spring as planned because of the restrictions required by the COVID-19 pandemic. The park planned to reopen on July 17, with precautions to minimize the risk of spreading the virus. However, since the Ontario Government was not allowing amusement parks to open, the facility remained closed.

Marineland is a former member of Canada's Accredited Zoos and Aquariums (CAZA). The company "voluntarily and temporarily" withdrew from CAZA in May 2017, stating it was expanding the area for animals and "will be continuing to work with CAZA to ensure that the expansion is successfully harmonized with CAZA principles".

Kiska is the only orca at Marineland. A 2012 report stated that Marineland was then looking for a companion for their orca. Since then, it appears that Kiska will be the last orca that the park will own. On May 28, 2015, the Legislative Assembly of Ontario passed the Prevention of Cruelty to Animals Amendment Act. The act prohibits the possession or breeding of orcas in Ontario while allowing Marineland to keep its orca. Marineland has stated its opposition to moving Kiska, preferring to import "an age-appropriate companion", not allowed under the Ontario law.

Marineland has many animals throughout the park that are not cetaceans or pinnipeds. Marineland has carried over these animals from its days as a 'game farm'.

Marineland has a collection of different rides, including a pair of roller coasters and a large launched free fall.

The park was founded by John Holer, a Slovenian immigrant who had worked in circuses in Europe. Holer and a partner bought a portion of the Harry Oakes estate near the falls. The park opened in 1961 as "Marine Wonderland and Animal Farm". Holer welded two large steel tanks together and brought in three sea lions and charged one quarter for admission and another to feed the animals. The attraction also featured an underwater show featuring two female swimmers.

In 1963, a trained sea lion "Jeff" escaped from Marine Wonderland and made it to the Niagara River and went over the falls. Holer offered a CA$50 reward and organized a helicopter search. The seal was recaptured by Holer a few days later in Queenston, where it was found sunning itself with teenager Tommy Haines, who was given the reward.

In 1964, Holer added two dolphins, along with a few other animals and the attraction became known as "Marineland And Game Farm". By 1966, a 2,000-seat "aquatheatre" was completed along with a "grotto" of aquariums and shops. The grotto in the new Aquarium Dome contained eight tanks used to display fresh-water fish. The park became a popular family attraction and recorded an annual attendance of 250,000 for the 1967 season. In 1968, the park added alligators. Neighbouring attraction "Niagara Falls Indian Village" closed down after the 1968 season and Marineland purchased their property.

In 1975, Marineland became involved in a controversy over another orca captured off Vancouver Island. The capture of 'Kanduke' by the Sealand of the Pacific aquarium of Victoria, British Columbia, for purchase by Marineland was blocked by the Government of British Columbia, at the instigation of Greenpeace activists. Claimed to be property by the BC government and resources by the Government of Canada, the orca eventually was transported to Marineland after it was determined that orcas were a resource under the control of the Canadian government. The incident led to the ending of the capture of orcas in British Columbia waters.

In 1976, Marineland announced a CA$50 million expansion on 1,000 adjacent acres, to include a 400-acre "safari park" and amusement centre. Construction began on a new 15,000-seat stadium and pool for killer whales. Marineland purchased two locomotives for a steam train railroad. When plans for Canada's Wonderland were announced, Holer decided to further increase the park's expansion plans, adding a Gothic castle, canals and the world's largest roller coaster, for a total cost of CA$80 million. The "Dragon Mountain" roller coaster opened in 1983 along with other rides. At a cost of CA$9 million, the roller coaster opened without CA$3 million reproductions of the American and Horseshoe falls, postponed to the future. In 1984, Holer announced the postponement of part of the expansion, citing an 86% increase in municipal property taxes, and threatened to move the facility across the river to the United States.

In 1982, Marineland purchased Keiko, a killer whale, from an aquarium in Hafnarfjörður, Iceland. Keiko started performing for the public and developed skin lesions indicative of poor health. He was then sold for $350,000 to Reino Aventura (now named Six Flags México), an amusement park in Mexico City, in 1985. Keiko was the star of the movie Free Willy in 1993. After spending 1996–1998 at Oregon Coast Aquarium, Keiko was returned to a sea pen in Iceland and was released to the ocean in July 2002. He swam to Norway, eventually settling in the Taknes fjord in November 2002, where he was not catching fish and had little contact with wild Orcas; until his death, Keiko was fed daily by the Keiko Project group. Keiko died of pneumonia in December 2003.

In 1986, an unidentified trainer was taken to the hospital after he fell off the park's male killer whale, Kandu 7, and was dragged by his leg around the pool during a trick.

In 2004, Marineland bought the Green Oaks Mobile Home Park across the street from the park with plans to relocate maintenance buildings to the site. In 2009, Marineland evicted 47 families that were tenants at the park. The tenants appealed to the Ontario Landlord and Tenant Board, lost their case and were ordered off the property by March 2010. Holer was ordered to pay $11,000 each to several tenants for harassment.

Holer died on June 23, 2018, aged 82. He was praised as an "immigrant success story" by Senator Don Plett (Manitoba). Holer had been seriously ill for five months and died at his home on Chippewa Parkway. Holer was survived by his wife Marie and son Peter. Another son, John Mark Jr., died in 2013.

The Mayor of Niagara Falls, Jim Diodati, sees Marineland at a "crossroads" with three options: to continue the current business model, to sell its 1,000 acres of land to real estate developers, or to become an amusement park without animals. Diodati favours the latter option. Marineland's lawyer Andrew Burns said that there would be no immediate changes to the business. At the time of his death, Holer was working on a new aviary attraction for Marineland. According to testimony before a Senate of Canada committee in May 2017, the 100-acre (40 ha) expansion was described as being one of the largest expansions Marineland has ever made. Holer himself described the overall park as only "half-developed."

On opening day in May 2019, two deer died in a stampede in the deer enclosure, which was reopened for the 2019 season. According to Marineland, a father and son caused the stampede, laughed at staff, and refused to leave the enclosure, then slipped away while staff quieted the animals. Marineland closed the deer enclosure afterwards until modifications are implemented to prevent a future stampede. On May 22, it was announced that the 18-year-old walrus "Apollo" had died of heart failure. It was the fourth walrus to die at Marineland within two years, after "Zeus", "Buttercup" and "Sonja", and left Marineland with a single walrus, "Smooshi". In June, Marineland opened its new "Polar Splash" splash park attraction at a cost of CA$6 million.

In June 2019, Marineland signed a ten-year partnership agreement with the Mystic Aquarium's Sea Research Foundation (a subsidiary of Ocean Wise Inc.) for beluga research. In September 2019, it was announced that Marineland had sold two beluga whales to Oceanographic, a Spanish facility owned by Ocean Wise Inc., with the permission of the Canadian government.

Although Marineland opened for the 2020 season, the park could not open the rides due to the COVID-19 pandemic.

Since 2012, the park has been the subject of several allegations of poor conditions for its animals by former employees and animal activists have protested outside its gates on several occasions. The park has been inspected by the Ontario Society for the Prevention of Cruelty to Animals (OSPCA) and Canada's Accredited Zoos and Aquariums (CAZA), many times over the years, some leading to orders issued by the OSPCA.

In 2012, articles were published by the Toronto Star alleging animal mistreatment, resulting in negative publicity. An inspection by the OSPCA and CAZA, however, found "no issues of concern". The Star reported that the OSPCA issued orders to Marineland to improve the water conditions for animals at the park and address specific issues with other animals, and that Marineland complied.

In 2015, the Government of Ontario banned the practice of breeding and keeping orcas in captivity, while allowing the existing one to remain at Marineland. Marineland's orca lives without any social interaction with other orcas, but has not been moved.

In November 2016 and January 2017, the OSPCA received a complaint from a former employee through the animal rights organization Last Chance for Animals. The OSPCA filed some charges against the park in late 2016 and early 2017, but all of the charges were withdrawn by government prosecutors later that year. Marineland has repeatedly stated publicly that the allegations are the work of disgruntled former employees, who have teamed up with activists wholly opposed to the keeping of animals in captivity and organizations which "seem to financially benefit from any resulting downturn in public opinion towards park operations". Marineland has further maintained that they make every effort to ensure the animals in their care are well provided for. The park employs a number of people who care for the animals day-to-day, as well as an experienced and qualified veterinary staff. Although it is a private facility, Marineland must comply with federal and provincial regulations, as well as comply with several animal welfare enforcement agencies, including regular and "snap" inspections. Marineland has filed nine lawsuits against activists, former employees and the media, and a further lawsuit against the OSPCA for malicious prosecution and reputational damage.

Marineland's main advertising comes through a series of radio and television commercials with the jingle "Everyone Loves Marineland". Marineland has also used other slogans over the years in its advertising:

All content from Kiddle encyclopedia articles (including the article images and facts) can be freely used under Attribution-ShareAlike license, unless stated otherwise. Cite this article:
Marineland of Canada Facts for Kids. Kiddle Encyclopedia.