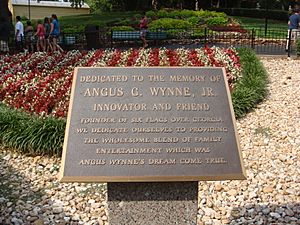 Dedicated to the Memory of Angus G. Wynne, Jr.

Angus Gilchrist Wynne Jr. (January 9, 1914 – March 12, 1979) was an American businessman. He is the founder of Wynnewood Shopping Center and community development in Oak Cliff, a residential and commercial district south of downtown Dallas. He also developed the Six Flags Over Texas, Six Flags Over Georgia, and Six Flags St. Louis theme parks in Texas, Georgia, and Missouri. He was CEO of Great Southwest Corp and Great Southwest Industrial District in Arlington, Texas. Angus Wynne Jr. later started Wynne Enterprises, conceptualizing one of the first water amusement parks in Galveston, Texas, but died before his dream could be developed.

Angus Jr. was the son of Angus G. Wynne Sr. of Texas and Nemo Shelmire Wynne, born in The Plains, Upper East Baton Rouge Parish, Louisiana. His father and grandfather practiced law in Wills Point until his family moved to Dallas around 1928. Angus G. Wynne Sr. was the first President of the State Bar of Texas.

His brother Bedford S. Wynne, was one of the initial owners and founders of the Dallas Cowboys professional football franchise, along with Clint Murchison Jr.

His son Angus G Wynne III is the owner of Wynne Entertainment in Dallas and has been a producer of music events since 1968.

His son Shannon Shelmire Wynne is an American restaurateur living in Dallas, TX. He is best known for the Flying Saucer Draught Emporium, 8.0 Bar, Flying Fish, Meddlesome Moth[1] and others.

Wynne attended Highland Park High School and graduated from there in 1931. Wynne attended the Lawrenceville School, then Washington and Lee University in Lexington, Va. from 1934–1935, before receiving a B.A. from University of Texas at Austin in 1938. During their time at UT, Wynne and his brother Bedford S. Wynne became brothers of the Texas Alpha chapter of the Phi Kappa Psi fraternity, as was their father Angus Wynne Sr., one of the chapter's founders in 1904.

He worked on Texas oil fields from 1938 to 1940 when he received an ensign's commission in the Navy. In the Navy, he was awarded six service stars for service in the European and Asiatic theaters during WWII.

Following a visit to the recently opened Disneyland in Anaheim, California, Wynne decided that his home state of Texas should have a local park for entertainment. Planning for such a place began in 1959, under the leadership of Wynne and the Great Southwest Corporation, along with the backing of various New York City investors. Construction on the park, and its next door neighbor, the Great Southwest Industrial Park, began in August 1960. Wynne first intended to name the park "Texas Under Six Flags" until his wife notified him that "Texas ain't under nothing." The "six flags" originally represented the six countries that have governed Texas: France, Spain, Mexico, The Republic of Texas, The Confederate States of America, and the United States of America.

With the significant cost of developing a park from the ground up becoming prohibitive, the company began acquiring parks with significant potential, but to date, had been less successful than those of Six Flags. AstroWorld, built by Judge Roy Hofheinz in Houston, Texas, was the first park to be acquired in 1975. Two years later, the company went on to purchase a New Jersey park developed by the Hardwicke Companies and designed by Warner LeRoy (son of Wizard of Oz director, Mervyn LeRoy), called Great Adventure. The last park that Wynne would see acquired in his lifetime under the Six Flags name was California's Magic Mountain (outside Los Angeles) in 1979. Wynne died that same year and although he was no longer associated with the company at the time of his death, Six Flags would eventually acquire numerous other properties and become the world's largest regional theme park chain.

Angus Wynne's civic involvement included developmental work for the University of Texas, Baylor University Medical Center and Children's Medical Center of Dallas. He also worked with the Cotton Bowl Council, the State Fair of Texas and the National Conference of Christians and Jews.

State Highway 360 through Arlington is officially designated the Angus G. Wynne Jr. Freeway although it is rarely referred to as such.

All content from Kiddle encyclopedia articles (including the article images and facts) can be freely used under Attribution-ShareAlike license, unless stated otherwise. Cite this article:
Angus G. Wynne Facts for Kids. Kiddle Encyclopedia.