Blue Hawk is a steel roller coaster located at Six Flags Over Georgia. Designed by Vekoma, Blue Hawk was originally built for Conko's Party Pier in New Jersey, where it was known as Kamikaze. It was relocated to Six Flags Over Georgia in 1992 as Ninja, and was the tallest roller coaster in the park at that time. In 2016, Six Flags announced that the ride would be renovated and renamed, with members of the public voting on the ride's new name.

Hunt's Pier in Wildwood, New Jersey purchased and installed this roller coaster, naming it Kamikaze, in 1989. Kamikaze was purchased by Six Flags and relocated to Six Flags Over Georgia, where it was given the new name Ninja. Ninja was placed in the park's Cotton States section and sits roughly where Z-Force was previously located prior to its removal after the 1990 season, opening to the public on March 1, 1992.

The ride received extensive work in 2016 and did not open with the park for its new season. The ride was repainted with blue track and gray supports, the track was inspected and repaired as needed to improve smoothness, and the trains were replaced with two new models featuring soft vest restraints instead of the previous over-the-shoulder harnesses. Park guests were invited to vote for one of three potential new names for the ride—American Eagle, Air Commander or Blue Hawk. After more than 6,000 votes were cast, voters selected Blue Hawk as the new name, followed by American Eagle and Air Commander. The renovated ride is themed to the American military and re-opened to guests on June 9, 2016. 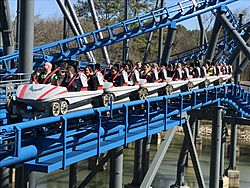 One of Blue Hawk's new trains

Blue Hawk uses two 28-passenger trains, each with seven cars carrying four passengers in two rows of two seats. Riders are held in place using vest-style restraints. As Blue Hawk departs the station, it turns to the right, dropping slightly before another right turn to start up the 122-foot-tall lift hill. Upon cresting the lift, the roller coaster dives downward to the right before swooping up into the first major element, a two-inversion butterfly. Exiting the butterfly, the train enters a wide-radius 270-degree curve to the left, setting up the third inversion, a reverse sidewinder.

All content from Kiddle encyclopedia articles (including the article images and facts) can be freely used under Attribution-ShareAlike license, unless stated otherwise. Cite this article:
Blue Hawk (roller coaster) Facts for Kids. Kiddle Encyclopedia.