Kissimmee ( ki-SIM-ee) is the largest city and county seat of Osceola County, Florida, United States. As of the 2020 census,the population was 79,226. It is a Principal City of the Orlando-Kissimmee-Sanford, Florida, Metropolitan Statistical Area, which had a 2010 population of 2,234,411. 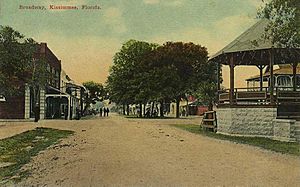 The area was originally named Allendale, after Confederate Major J. H. Allen who operated the first cargo steamboat along the Kissimmee River – the Mary Belle. It was renamed Kissimmee when incorporated as a city in 1883. The etymology of the name Kissimmee is debated, apart from general agreement that it is Native American in origin. Its growth can be credited to Hamilton Disston of Philadelphia, who based his four-million acre (8,000 km2) drainage operation out of the small town. Disston had contracted with the financially wobbly state of Florida to drain its southern lands, for which he would own half of all he successfully drained. This deal made Disston the largest single landowner in the United States.

Disston's dredging and land speculation required a small steamboat industry to transport people and goods along the new waterway. The Kissimmee shipyard was responsible for building most of these large steamships, which were just one jump ahead of civilization—with Kissimmee as the jumping off point. Concurrently, the South Florida Railroad was growing and extended the end of its line from Sanford down to Kissimmee, making the town on Lake Tohopekaliga a transportation hub for Central Florida. On February 12, 1885, the Florida Legislature incorporated the Kissimmee City Street Railway. 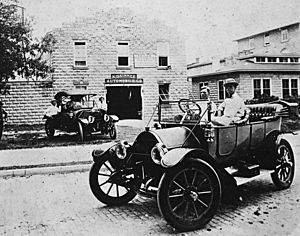 But the heyday of Kissimmee was short-lived. Expanding railroads began to challenge the steamships for carrying freight and passengers. By 1884, the South Florida Railroad, now part of the Plant System, had extended its tracks to Tampa. The Panic of 1893 was the worst depression the U.S. had experienced up to that time, crushing land speculation and unsound debt. Hamilton Disston closed his Kissimmee land operation. Consecutive freezes in 1894 and 1895 wiped out the citrus industry. The freezes, combined with South Florida's growth and the relocation of steamship operations to Lake Okeechobee, left Kissimmee dependent on open range cattle ranching.

Kissimmee had a population of 4,310 in 1950. At that point there was some citrus packing as well as the ranching.

Ranching remained an important part of the local economy until the opening of nearby Walt Disney World in 1971. After that, tourism and development supplanted cattle ranching to a large measure. However, even though the Disney facility took over much of the open range cattle lands, cattle ranches still operate nearby, particularly in the southern part of Osceola County.

On August 13, 2004, Hurricane Charley passed through Kissimmee with winds in excess of 100 miles per hour, damaging homes and buildings, toppling trees and cutting electrical power to the entire city. Kissimmee Utility Authority restored power to 54 percent of the residents in the first 72 hours; 85 percent were restored within one week. Service was restored to all customers on August 28. Three weeks after Hurricane Charley, the area was struck by Hurricane Frances, followed by Hurricane Jeanne three weeks after Frances.

A large geographical area of unincorporated Osceola County also refers to their area as Kissimmee. This includes most of the 192 corridor west of the city border to Highway 27, areas north of the city to Hunters Creek, and areas south of the city to Poinciana.

Drained by the Kissimmee River, the city is situated on the northwest shore of Lake Tohopekaliga (locally called Lake Toho, West Lake Toho, or simply West Lake) in central Florida. Shingle Creek, largely considered the headwaters of the Everglades, also runs through the city. Shingle Creek features a popular canoe/kayak trail that runs from Steffe Landing on US 192 and ends in Lake Tohopekaliga.

The downtown area lies near the intersection of U.S. Highway 17/92 and U.S. Highway 192. The downtown of Kissimmee does not possess any big skyscrapers; most of the buildings are two or three stories high. The biggest and the tallest building in the downtown is the Osceola County courthouse. The main thoroughfare follows along Highway 17/Highway 92 through the city's center and is a combination of three streets: Main Street, Broadway Street, and Emmett Street. The downtown area consists largely of restaurants, small shops, and historic residences. The University of Central Florida has a business incubator located in the area that is an important part of the economic engine downtown.

Kissimmee features a Multi Modal Transportation Hub located between Neptune Road and Monument Streets. This hub includes the Amtrak train station, which will be a station stop on the SunRail commuter rail system. There is also a Greyhound bus station. The hub also features a bus terminal providing service by the Lynx network.

Kissimmee Gateway Airport has four fixed-based operators that provide service to the area. Kissimmee Gateway Airport (ISM) accommodates general aviation air service 24 hours a day with two paved airport runways—respectively 5,000 and 6,000 feet. There are also two flight training schools, and a museum at the airport. Orlando International Airport can be reached from Kissimmee in 15 minutes by car.

The major land transportation arteries are the Florida's Turnpike, Interstate 4, Osceola Parkway, and US 192. Among other important routes are US 17/92 that join with US 441 into the Orange Blossom Trail (OBT) and State Route 423 also known as the John Young Parkway. 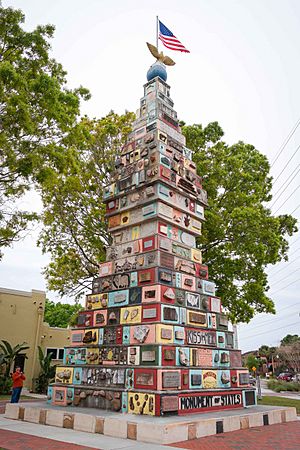 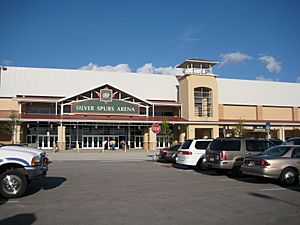 Osceola Heritage Park is an event facility featuring a concert arena (Silver Spurs Arena) and professional sports stadium (Osceola County Stadium). The Silver Spurs Arena has been host to many acts, ranging from Hilary Duff and Bob Dylan to an annual rodeo event. Jehovah's Witnesses also use The Silver Spurs Arena for their annual District Conventions. In 2008, a number of English and Spanish conventions were held by the Witnesses, bringing thousands of delegates to the Kissimmee area for the three-day events.

Kissimmee has a number of public parks including:

The Shingle Creek Regional Trail (SCRT) is an inter-governmental project that will eventually connect Kissimmee to Orlando through a 32-mile bicycle trail. It runs along the environmentally sensitive Shingle Creek, and was included on President Obama's America's Great Outdoors list. Various parts of the trail are currently open, with many parts to be completed by 2016. It will be 12 feet wide, composed variously of bridges and paved roadway, and travel through mostly undeveloped area.

Kissimmee is also home to the Loop, a large outdoor shopping mall at John Young and Osceola Parkways on the Orange/Osceola County line. It features stores such as American Eagle, Kohls, and Best Buy. There is also a multi-plex theater.

Kissimmee is near Orlando, home to Universal Orlando Resort and SeaWorld, and Lake Buena Vista/Bay Lake Walt Disney World Resort, allowing tourists to access the parks through the city.

The climate in this area is characterized by hot, humid summers and generally mild to cool winters. According to the Köppen Climate Classification system, Kissimmee has a humid subtropical climate, abbreviated "Cfa" on climate maps.

Multinational multi-level marketing company Tupperware Brands is based in Kissimmee.

According to Kissimmee's 2018 Comprehensive Annual Financial Report, the top employers in the city are:

Private universities, colleges, and others 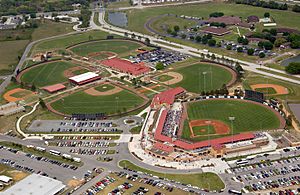 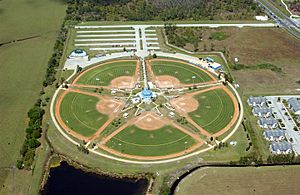 The Houston Astros conducted spring training in Kissimmee, at Osceola County Stadium from 1985 to 2016. The stadium also hosts numerous amateur baseball events throughout the remainder of the year in conjunction with; USSSA, Triple Crown Sports, World Baseball Federation and Promotion Sports. The Jim Evans Academy of Professional Umpiring has also called Osceola County Stadium home since 1994.

The Osceola County Softball Complex is a facility of five softball fields which are host to a variety of amateur sports events. It is the home of the USSSA 2005 Complex of the Year Award, the Rebel Spring Games, and numerous other fast-pitch softball, slow-pitch softball, and youth baseball events.

Austin-Tindall Regional Park is an athletic facility in the area that is host to a variety of annual events.

Kissimmee features a Multi Modal Transportation Hub located between Neptune Road and Monument Streets. This hub includes the Amtrak train station, which is a station stop on the SunRail commuter rail system. There is also a Greyhound bus station. The hub also features a bus terminal providing service by the Lynx network.

Kissimmee Gateway Airport has four fixed-based operators that provide service to the area. Kissimmee Gateway Airport (ISM) accommodates general aviation air service 24 hours a day with two paved airport runways—respectively 5,000 and 6,000 feet. There are also two flight training schools, and a museum at the airport. Orlando International Airport can be reached from Kissimmee in 15 minutes by car.

The major roads in the Kissimmee area are the Florida's Turnpike, Interstate 4, Osceola Parkway, and US 192. Among other important routes are US 17/92 that join with US 441 into the Orange Blossom Trail (OBT) and the John Young Parkway.

All content from Kiddle encyclopedia articles (including the article images and facts) can be freely used under Attribution-ShareAlike license, unless stated otherwise. Cite this article:
Kissimmee, Florida Facts for Kids. Kiddle Encyclopedia.