Splendid China was a theme park in Four Corners, Florida near Walt Disney World and Orlando. It opened in 1993, and closed on December 31, 2003. It was a sister park to Splendid China in Shenzhen, China which is still open. Florida Splendid China cost $100 million to build.

At its height of popularity, it was a 75-acre (30 ha) miniature park with more than 60 replicas at one tenth scale. Each piece was handcrafted to maintain authenticity. The park's replica of the Great Wall took nearly seven million 1-inch (25 mm) long bricks and stretches about .5 miles (0.80 km). The replica of the Leshan Buddha was four stories tall. Florida Splendid China put on shows featuring a rotating cast of 60 dancers, actors, and acrobats from the People's Republic of China (PRC). After a number of artisans, dancers and members of the cast escaped and sought political asylum in the United States, Florida Splendid China reduced the number of cast members from overseas and hired local performers.

Splendid China was criticized for being owned by the government of the People's Republic of China, in that officers of the corporation that owned, controlled and operated Florida Splendid China (China Travel Service) were appointed by the State Council of the People's Republic of China. The critics cited the following specific allegations about the inclusion of minority exhibits:

Specifically, we are protesting the inclusion of the Potala Palace that was built by the Tibetan people and served as the home of successive Dalai Lamas since 1645, the Id Gah Mosque and Tomb of Abakh Hoja which serve as cultural icons of the people of Eastern Turkestan and the Mausoleum of Genghis Khan and the Mongolian Yurt exhibit which attempt to add a Chinese name to the Southern Mongolian people.

The original idea for the Florida Splendid China theme park was that of Josephine Chen, a former educator from Taiwan. In 1988, Chen toured a prototype park, "Splendid China Miniature Scenic Spot", in Shenzhen, China operated by China Travel Service (CTS). This park is close to Hong Kong. 3.5 million people visited the park during the first year. CTS recouped its US$100 million investment during this first year.

She negotiated an agreement with CTS, controlled by Overseas Chinese Affairs Office, under the China National Tourism Administration. Under the agreement, Chen supplied the land and management services, while CTS would construct the building, and supply non-management personnel.

On December 19, 1989, groundbreaking ceremonies were held for the start of construction for Florida Splendid China.

In December 1993, the American partners were bought out by the Chinese government.

In May 1996, the Orlando Sentinel reported that the President, General Manager, and Senior Vice-President for Entertainment were replaced in what was described as a 'big management shakeup'.

In March 1998, the Orlando Sentinel reported that Citizens Against Communist Chinese Propaganda asked Attorney General Janet Reno and the US Department of Justice to investigate Florida Splendid China for violation of the Foreign Agents Registration Act.

In May 1999, the Far East Economic Review reported that Florida Splendid China was losing $9 million a year.

Protest demonstrations started against perceived Chinese Communist Party propaganda in the Mongolian and Tibetan exhibits. In November 1995, the Pinellas County, Florida school board voted to ban trips to Florida Splendid China. In March 1996, at the 11th demonstration against perceived Chinese Communist Party propaganda in the Tibetan, Mongolian and Eastern Turkestan exhibits, five college students sat down and closed the front gate Florida Splendid China while a large crowd of demonstrators watched. On April 19, 1996 the Representative Assembly of the 1996 Florida Teaching Professionals-NEA State Conference in Orlando passed a resolution to ban personal or school trips to Florida Splendid China by its members. The resolution passed overwhelmingly.

In October 1997, the brother of the 14th Dalai Lama of Tibet (Takster Rinpoche), attended the 20th demonstration at Florida Splendid China to commemorate the 48th anniversary of takeover of Eastern Turkestan.

In December 1999, Citizens Against Communist Chinese Propaganda held the 32nd demonstration at the main gate of Florida Splendid China to commemorate the 6th anniversary of the Grand Opening.

In May 2000, the Orlando Business Journal reported that Sunny Yang, Florida Splendid China president, confirmed that the motel property was about to change hands and that sources close to the attraction had said that the park was to be sold and closed.

In November 2000, the Orlando Business Journal reported that amid allegations of financial mismanagement, the former president (Sunny Yang) of the struggling Splendid China attraction has been sent back to mainland China. 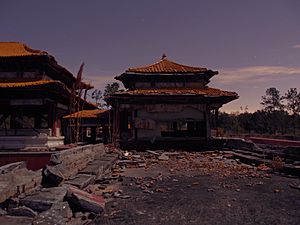 After closing its gates, Splendid China suffered a rash of attacks from thieves and vandals. Hundreds of items were taken ranging from small miniatures to portions of life-size statues. The perpetrators, thought to be local youths, were never caught. The property has passed through several owners and in July 2009 was up for sale at an asking price of $30 million.

By March 2016, there was nothing left of the park as construction had begun for the resort.

All content from Kiddle encyclopedia articles (including the article images and facts) can be freely used under Attribution-ShareAlike license, unless stated otherwise. Cite this article:
Splendid China (Florida) Facts for Kids. Kiddle Encyclopedia.