Poinciana is a settlement and census-designated place (CDP) in Osceola and Polk counties in the U.S. state of Florida. It lies southwest of Kissimmee and approximately 14 miles (23 km) east of Haines City. As of the 2010 United States Census, the CDP had a population of 53,193.

As of April 2012 the population of the 9 villages which make up the Association of Poinciana Villages (APV), which covers a wider area than the CDP, was reported as 69,857. According to the latest census reports the adjoining tracts outside the CDP represent an additional 29,914 persons. Depending on the definition, the greater Poinciana Area represents a population of between 53,193 and 83,107. This puts Poinciana as one of the fastest growth areas for Central Florida over the past decade. 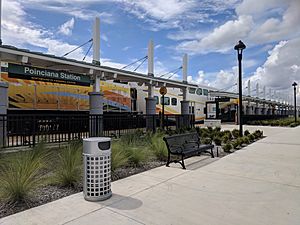 U.S. Highway 17/92 (here part of the Orange Blossom Trail) runs through the north of Poinciana. The Poinciana Parkway (State Road 538), a toll road to connect Poinciana more directly to Interstate 4, was opened on April 30, 2016.

Poinciana is the southern terminus of the SunRail system. SunRail's Poinciana station is located in the north of Poinciana near the intersection of Orange Blossom Trail (aka U.S. Highway 17/92) and Poinciana Boulevard, and opened on July 30, 2018. Local bus service is provided from central areas of Poinciana to Kissimmee and Haines City by the Lynx network.

Poinciana was planned as a Planned Unit Development (PUD). Most of the PUD was developed in 10 Villages, which form the Association of Poinciana Villages (APV). Four of the villages are in Osceola County and six are in Polk County. Located on approximately 47,000 acres (190 km²), the villages are a deed-restricted community, governed by a homeowner association, the APV. Solivita (Village 10), one of the Villages within Polk County, is a 55+ community, and comprises two Community Development Districts, Poinciana CDD and Poinciana West CDD.

Neighbor subdivisions such as Waterford, Little Creek, Brighton Lakes, Oak Hammock Preserve, Crescent Lakes, Trafalgar, Doral, Isles of Bellalago, Cypress Cove, Cypress Woods, Deerwood, Wilderness, Bellalago, etc. are outside the CDP. Many of these subdivisions were defined in the original Poinciana boundary PUD but were developed as separate communities outside the APV.

Poinciana was planned in the 1960s. The original developer was Gulf American Corporation. Poinciana was conceived as a retirement destination, and the first homes were built in 1973 around the Poinciana Golf and Racquet Club. Since the mid-1980s the developer has been AV Homes (formerly Avatar Holdings). By 1994 the population had only risen to about 8,000, but since then growth has been rapid.

In addition there were 29,914 residing in the non-CDP neighborhoods. Poinciana is 35.8% Puerto Rican and is considered a "Little Puerto Rico" in Florida.

For census 2000 there were 4,153 households, out of which 50.3% had children under the age of 18 living with them, 65.5% were married couples living together, 15.4% had a female householder with no husband present, and 14.2% were non-families. 10.5% of all households were made up of individuals, and 3.7% had someone living alone who was 65 years of age or older. The average household size was 3.29 and the average family size was 3.49. This information will be updated for census 2010 when it becomes available.

All content from Kiddle encyclopedia articles (including the article images and facts) can be freely used under Attribution-ShareAlike license, unless stated otherwise. Cite this article:
Poinciana, Florida Facts for Kids. Kiddle Encyclopedia.