Haines City is a city in Polk County, Florida, United States. The population was 13,174 at the 2000 census and 20,535 at the 2010 census. Haines City is the third most populous city in Polk County. It is part of the Lakeland–Winter Haven Metropolitan Statistical Area, which, in turn, is considered part of the Tampa Bay Area for some purposes, although the city is much closer to Orlando than Tampa. 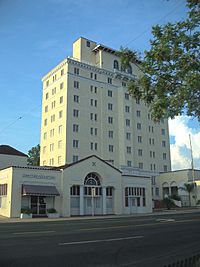 Haines City was platted in 1885, shortly after the South Florida Railroad reached the area. The city was first known as Clay Cut, but there was no railroad station. It is said that the inhabitants persuaded the railroad company to build a station by agreeing to rename their city Haines City, to honor a senior railroad official, Colonel Henry Haines.

The City of Haines City was originally incorporated under the General Statutes of Florida as the Town of Haines City on February 23, 1914. The first state legislative act affecting the City was enacted on May 20, 1919, and, by Chapter 8272, it was reincorporated under a Mayor-Council form of government. The present charter was adopted as Chapter 12790 on July 1, 1927, changing the form of government to “Commission-Manager Plan,” as amended. The City operates under a commission-manager form of government and provides the following services as authorized by its charter: Public safety (Police and Fire), Streets and Highways, Culture-Recreation, Public Improvements, Sanitation, Planning and Zoning and General and Administrative Services.

The early settlers planted citrus groves, and citrus growing and processing became the main industry of the city.

From 1974 to 1986, Circus World, a theme park created by the Ringling Brothers and Barnum & Bailey Circus, was open just north of Haines City. After Circus World shut down, Boardwalk and Baseball opened on the same site. It featured carnival games and theme park styled rides like the Grand Rapids Flume. It closed in 1990, and the site has been redeveloped as a residential and shopping complex named Posner Park.

In recent years Haines City has seen explosive growth, largely because of its easy access to Orlando and Walt Disney World Resort. New residential areas have been developed on the edges of the city. On high ground in the north of the city, Southern Dunes, a golf and country club with both vacation homes and residential homes, was developed between 1995 and 2005.

In 2004, Haines City experienced three hurricanes. Hurricane Charley passed through the city in August. Hurricane Frances came right on the heels of Charley but mostly just dumped a lot of rain. Hurricane Jeanne soon followed packing a punch not quite as strong as Charley but longer lasting. The city has since recovered. 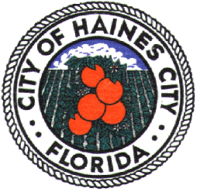 The former seal of Haines City.

Four years after Charley, Haines City got struck again this time by a weaker storm named Tropical Storm Fay. This storm caused little damage, but schools closed on the second day of the school year (Tuesday, August 19) due to it; the original plan had been to close schools Tuesday and Wednesday, but the lack of danger it showed on Tuesday caused the change in agenda. 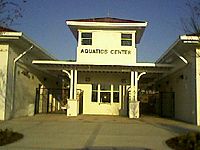 The new Aquatics Center in the park.

A new park on Lake Eva, replacing a previous park on the site, was completed in 2009. The city has also built a new park, called "8-Acre Park", and auditorium in the Oakland area, on the northern side of the city.

Haines City is responding to the arrival of Legoland Florida in Winter Haven. Legoland's expected tourist influx is leading Haines City to search for ways to advertise and bring more people to the historic downtown area, specifically motorists coming down U.S. 27 from Interstate 4.

Haines City is located in the humid subtropical zone as designated by (Köppen climate classification: Cfa). The porous white sands and open terrain create the often hot and dry climate that parts of interior Florida near the Lakes Wales sand ridge is known for.

There were 4,749 households out of which 30.7% had children under the age of 18 living with them, 49.3% were married couples living together, 17.4% had a female householder with no husband present, and 28.2% were non-families. 23.2% of all households were made up of individuals and 12.3% had someone living alone who was 65 years of age or older. The average household size was 2.73 and the average family size was 3.18.

The major highways in the Haines City area are:

The streets are laid out in a rough grid plan, with streets running north-south and numbered from 1st Street to 30th Street, and named avenues running west-east.

Haines City is served by an hourly bus service to Lake Alfred and Winter Haven by Winter Haven Area Transit and, from December 16, 2012, by hourly Lynx bus services to Poinciana and Four Corners.

Railroads have always been a part of Haines City's history, and freight and passenger trains still run through the city, although the railroad station has been closed for many years.

All content from Kiddle encyclopedia articles (including the article images and facts) can be freely used under Attribution-ShareAlike license, unless stated otherwise. Cite this article:
Haines City, Florida Facts for Kids. Kiddle Encyclopedia.