Clermont is a city in Lake County, Florida, United States, about 22 miles (35 km) west of Orlando and 22 miles (35 km) southeast of Leesburg. The population was 43,021 in 2020. The city is residential in character and its economy is centered in retail trade, lodging, and tourism-oriented restaurants and bars. It is part of the Orlando–Kissimmee–Sanford Metropolitan Statistical Area.

Clermont is home to the 1956 Florida Citrus Tower, one of Florida's early landmarks. 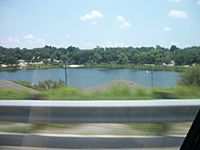 Lake Sunnyside as seen from high above eastbound SR 50, one of many lakes in Clermont.

The Clermont area lies on the northern part of the Lake Wales Ridge. There are rolling hills atypical of the Florida peninsula. Nearby are the Clermont Chain of lakes and Lake Apopka.

The annual average variations of various measurements are:

Clermont was founded in 1884 and named for the French birthplace of the manager of the Clermont Improvement Company, A.F. Wrotniski. The city was incorporated in 1916.

The historic downtown district appearance has not changed much since 1962.

The population grew 207% growth from 2000–2010, with commensurate economic growth, attracting big box retail stores. In spring 2010, the Clermont Landings shopping center opened with 20 shops and restaurants and the city's first cinema. The increased pollution has affected the city's lakes and other natural resources.

Waterfront Park is located along Lake Minneola, The park includes picnic areas, a swimming area, fishing piers and a playground. There are rentals of paddleboards, kayaks and bicycles. A fitness trail that is part of a 30-mile system runs through the park.

21.28% of households had children under the age of 18 living with them, 55.1% were married couples living together, 10.3% had a female householder with no husband present, and 31.5% were non-families. 26.3% of all households were made up of individuals, and 12.5% had someone living alone who was 65 years of age or older. The average household size was 2.29 and the average family size was 2.73.

The main roads through Clermont consist of State Road 50 and U.S. Route 27.

Lake-Sumter State College and the University of Central Florida have a joint-use campus in Clermont.

A salesman wondered into town in 1904 and spoke promises of donating books to start a library if the town helped him sell his Chautauqua lectures to the folks. Many town members with money to spare put forth what they could, excited at the prospective to having a library open. However, come time for the lectures and only a few of the speakers showed- no salesman or books present. Not all money was handed over; the cost for the last lecture was still available, and with that amount they began to organize their own library. This was hosted in the Montrose Street home of Mrs. Payson Pierce, with the collection of books open to the town on Saturday afternoons. The Clermont Library Club also hosted their meetings at Mrs. Pierce's house with her permission. The books were moved to Isiah Benson's Lake Avenue house in 1910 and to the Baptist Church the following year due to the increase in library items but lack of shelving space.

Prior to this, residents paid 50 cents a year for their patronage which helped pay the dues to those that hosted the library. In the summer of 1914, the Friends of the Library fundraised for $600 to erect a one-room building on 630 DeSoto Street, a lot donated by Alice Cooper. The library was funded by the club and its small circulating collection staffed by Clermont Women's Club volunteers until the city took over in the 1950s and the Cooper Memorial Library Association was formed to administer the public library. In 1980, a former bank building was purchased, and to transfer the books from one location to another, a human chain of town volunteers was made between both locations. The books were passed "hand by hand via a people chain" across the empty lots to their new home. Mike Delaney, a Friends of the Library member, reflected on this event: "It was an amazing honor to be part of the early book brigade when I was seven ... it was an experience that I will never forget that brought the community together". In 1984, the building was expanded by more than 4,000 square feet, adding the Florida Room and Children's Room. In 1982, the Cooper Memorial Library joined the Lake County Library System, and is the only continuous member of that system. The Cooper Memorial Library in Clermont is staffed by the Lake-Sumter State College and the Lake County Library System. 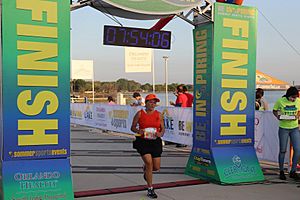 All content from Kiddle encyclopedia articles (including the article images and facts) can be freely used under Attribution-ShareAlike license, unless stated otherwise. Cite this article:
Clermont, Florida Facts for Kids. Kiddle Encyclopedia.