The Clermont chain of lakes is a chain of lakes centered on Clermont, Florida. The chain is orientated from southeast to northwest and fed primarily by streams and groundwater flow. They make up the middle part of the Palatlakaha River watershed which forms the headwaters of the Ocklawaha River. The lakes are notable for their red to tea-colored water from tannic acid.

The three largest lakes, Louisa, Minnehaha, and Minneola constitute the main part of the chain.

Louisa the largest lake, is shallow and flat-bottomed at around 10 feet. It features Lake Louisa State Park on its southern shore. The rest of the lakeshore is developed with suburban subdivisions. Through the park flows the primary inflows of the lake. Little Creek originates from the Lake/Polk County border and Big Creek starts from the area of the Green Swamp adjacent to the Lake Wales Ridge around Lake Lowery in Polk County as Green Swamp Run.

A short river connects Lake Susan to Lake Minnehaha, the second largest lake. Minnehaha averages 14 feet in depth with areas over 18 feet deep. Lake Minnehaha is more developed than Louisa with suburban housing along all but a bay on its northwest shoreline, Cypress Cove, which is swampland unsuitable for development. 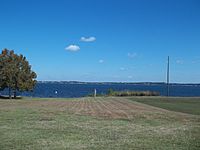 A neck separates Lake Hiawatha from Lake Minneola the third largest lake in the chain and the deepest at around 18 feet in depth with parts close to downtown Clermont approaching near 30 feet in depth. Minneola is also the most developed lake with downtown Clermont and Minneola along its south and eastern shores. The Palatlakaha River flows out of Crystal Cove on its northwest shore. There is a public boat ramp and swimming area on Waterfront Park.

Among the main chain of lakes are smaller lakes connected to them.

Dixie Lake is the largest lake within Lake Louisa State Park and during high water levels flows into Big Creek. There are rental cabins on its south shore.

Crescent Lake in the suburb of South Clermont is connected to Lake Minnehaha via Lake Hattie and Lake Williamee through a canal connecting the four. Crescent Lake has a bay at its south end, Crescent Cove separated by private island. Hattie lake is round-shaped and has 3 private community boat ramps. Williamee is mostly shallow and plant covered.

Lake Winona in Clermont is on a peninsula separating Minneola from Minnehaha, it's connected to Minnehaha by a canal which it is of similar depth to with deeper areas like Minneola.

North of the main chain the Palatlakaha River is lined with 8 lakes the surrounding area of which is within the city of Groveland.

All content from Kiddle encyclopedia articles (including the article images and facts) can be freely used under Attribution-ShareAlike license, unless stated otherwise. Cite this article:
Clermont chain of lakes Facts for Kids. Kiddle Encyclopedia.