Katrina Elizabeth DiCamillo is an American writer of children's fiction for all reading levels, usually featuring animals. She is one of six people to win two Newbery Medals, recognizing her novels The Tale of Despereaux (2003) and Flora & Ulysses (2013). Her best-known books for young children are the Mercy Watson series, illustrated by Chris Van Dusen.

DiCamillo was the U.S. National Ambassador for Young People's Literature, appointed by the Library of Congress for the term comprising 2014 and 2015.

DiCamillo won the American Library Association's Newbery Medal, which recognizes the previous year's "most distinguished contribution to American literature for children," in 2004 for The Tale of Despereaux and again in 2014 for Flora & Ulysses; since the award's introduction in 1922, only six writers have won two of the annual awards. She won the 2000 Josette Frank Award for Because of Winn-Dixie and the 2006 Boston Globe–Horn Book Award in the children's fiction category for The Miraculous Journey of Edward Tulane. She, co-writer Alison McGhee, and illustrator Tony Fucile won the ALA Theodor Seuss Geisel Medal in 2011, recognizing Bink and Gollie as the previous year's "most distinguished book for beginning readers".

In 2012 Winn-Dixie was ranked number 30 among all-time children's novels in a survey published by School Library Journal, a monthly with primarily U.S. audience. Despereaux (51) and Edward Tulane (59) also made the Top 100 list.

In 2005, Because of Winn-Dixie was released as a film by 20th Century Fox. Universal Pictures released The Tale of Despereaux on December 19, 2008. The Miraculous Journey of Edward Tulane was optioned by New Line Cinema and is in early pre-production. In 2013, Robert Zemeckis signed on to direct the Edward Tulane movie. 20th Century Fox has hired Martin Hynes to write a script based on the book, The Magician's Elephant. 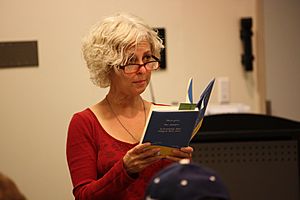 All content from Kiddle encyclopedia articles (including the article images and facts) can be freely used under Attribution-ShareAlike license, unless stated otherwise. Cite this article:
Kate DiCamillo Facts for Kids. Kiddle Encyclopedia.