Sebring ( SEE-bring) is a city in Highlands County, Florida, United States, nicknamed "The City on the Circle", in reference to Circle Drive, the center of the Sebring Downtown Historic District. In 2010, the United States Census Bureau reported a population of 10,491. It is the county seat of Highlands County, and is the principal city of the Sebring Metropolitan Statistical Area.

Sebring is the home of the Sebring International Raceway, created on a former airbase, first used in 1950. It hosted the 1959 Formula One United States Grand Prix, but is currently best known as the host of the 12 Hours of Sebring, an annual WeatherTech SportsCar Championship race. Nearby Highlands Hammock State Park is a popular attraction.

Sebring was founded in 1912. It was named after George E. Sebring, a pottery manufacturer from Ohio who developed the city. The village of Sebring, Ohio, is also named for George E. Sebring (1859–1927) and his family. It was chartered by the state of Florida in 1913, and was selected as the county seat of Highlands County when the county was created in 1921.

The city's geography is dominated by 9,212-acre (37 km2) Lake Jackson, but 420-acre (1.7 km2) Dinner Lake and 137-acre (0.6 km2) Little Lake Jackson are also within the city limits. Highlands county has more than 84 lakes, Most of the area is rural and part of the Florida scrub ecosystem, with smaller areas of hammocks and cypress swamps, similar to those found at Highlands Hammock State Park, four miles (6 km) west of Sebring.

There were 3,969 households out of which 23.1% had children under the age of 18 living with them, 42.0% were married couples living together, 12.0% had a female householder with no husband present, and 41.9% were non-families. 36.0% of all households were made up of individuals and 21.0% had someone living alone who was 65 years of age or older. The average household size was 2.25 and the average family size was 2.91. 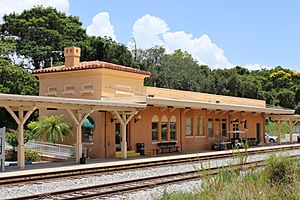 Sebring has no interstate highways or other limited access roads. U.S. Route 27 (cosigned with U.S. Route 98 in Sebring) is the major artery providing access to the rest of the state. State Road 17 begins in Sebring and heads north to its terminus in Haines City. State Road 64 (to the north) and State Road 66 (to the south) are important secondary roads. Several of Sebring's streets are named after automobile manufacturers or their models, as is evident in Peugeot Street, Ferrari Drive, Porsche Avenue, Vantage Terrace, Corvette Avenue, and Thunderbird Road, to name a few.

Sebring Regional Airport is located a few miles southeast of the city and provides general aviation facilities for Sebring. The airport is also the home of the Sebring International Raceway, the host of the 12 Hours of Sebring, second round of TUDOR United SportsCar Championship automobile race, held annually in March. The nearest regularly scheduled passenger service is provided at Orlando International Airport, 70 miles (110 km) to the north. The airport has also hosted the annual US Sport Aviation Expo for eight years.

The city is served by Amtrak from the Sebring station, a depot built in 1924 by the Seaboard Air Line and listed on the National Register of Historic Places. Amtrak's daily service to Sebring consists of two trains each from the Silver Meteor and Silver Star, heading south to Miami and north to Tampa, Orlando and New York City. CSX Transportation owns the track over which Amtrak operates. The South Central Florida Express railroad connects to the CSX line in Sebring, allowing transportation of sugar from Clewiston to the rest of the country.

All content from Kiddle encyclopedia articles (including the article images and facts) can be freely used under Attribution-ShareAlike license, unless stated otherwise. Cite this article:
Sebring, Florida Facts for Kids. Kiddle Encyclopedia.