Osceola County ( o-si-OH-lə) is a county located in the central portion of the U.S. state of Florida. As of the 2020 census, the population was 388,656. Its county seat is Kissimmee. Osceola County is included in the Orlando–Kissimmee–Sanford, Fla. Metropolitan Statistical Area.

Being 54.3% Hispanic, Osceola is one of three Hispanic-majority counties in Florida, owing to its large Puerto Rican American population. It also is the 12th-largest majority-Hispanic county in the nation.

Osceola County was created in 1887. On July 21, 1821, Florida was divided into two counties, named Escambia County to the west and St. John's County to the east. In 1824, the southern part of St. John's County became Mosquito County, with Enterprise as the county seat. In 1844, Brevard County was carved out from Mosquito County. When Florida became a state in 1845, Mosquito County was renamed Orange County. On May 12, 1887, Osceola was named a county, having been created from both Orange and Brevard Counties. Osceola County reached all the way down to Lake Okeechobee until 1917 when Okeechobee County was formed.

Since the late 20th century, Osceola County has experienced a significant influx of migrants from the Commonwealth of Puerto Rico, the unincorporated territory of the United States, and in the 2000 U.S. Census Puerto Rican was the largest self-reported ancestry group. 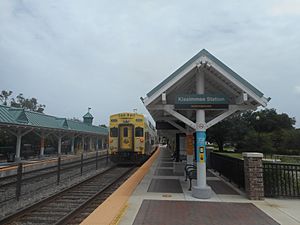 CSX's A-line, formerly the Atlantic Coast Line Railroad mainline, and originally built by the South Florida Railroad in the 1880s, runs through the urbanized northern part of the county. CSX has leased the line to the FDOT. Intercity passenger service is provided by Amtrak at Kissimmee station and commuter passenger service is operated by SunRail, with stops at Kissimmee and Poinciana.

Currently, a new suburb is planned in Osceola County called Destiny. If completely built, it would house up to 240,000 residents.

The School District of Osceola County, Florida serves the county. The county is home to 47 schools, not including colleges.

There are currently six branches of the Osceola County Library System:

The Hart Memorial Library is home to the Ray Shanks Law Library, and TechCentral the library system's "creative space".

Until 1989, there was no independent Osceola Library System. Instead, Osceola patrons were taken care of by Orange County Library System. Before that, there were two libraries, which are still named after the original independent libraries, run by women's organizations: Veteran's Memorial in Saint Cloud and Hart Memorial Library in Kissimmee.

In 1910, land for the Hart Memorial Library was donated by a widow of a former Florida Governor, Carrie S. Hart. It was located on North Stewart Avenue in Kissimmee . In 1914, women pooled money together from themselves and other community members to build the actual building and Annie Palmer Fell, another widow of a prominent Florida man, donated furnishings and books from her personal collection to begin building inventory in the new library. In 1968, the location moved to a 4,000 square foot building on Broadway and Dakin. Hart Memorial Library is the Osceola headquarters and is now located in a 43,000 square building .

Veteran's Memorial Library was at first a reading room until enough funds were raised to build the first official location on Massachusetts Avenue in Saint Cloud. In the early 70's the location moved to a former SunBank location on 10th Street and New York Avenue. In 1995, this branch moved for its final time to a larger building on Indiana Avenue and 13th street where it is still located today.

The first Poinciana Branch was opened in 1988. It was a modular building and consisted of a 14,000 book collection. This branch was eventually moved into a larger location with a collection of 40,000 books and computer access for patrons.

Osceola Library Systems began as an independent organization on April 1, 1989.

In 1990, the Buenaventura Library opened.

In 1991, volunteers helped open the Kenansville Branch Library in a shared space with the old Kenansville school. During the 2004 hurricanes, the collection was a total loss. It was rebuilt in 2007 with a larger collection, including books, DVDs, and computer/wifi access.

All content from Kiddle encyclopedia articles (including the article images and facts) can be freely used under Attribution-ShareAlike license, unless stated otherwise. Cite this article:
Osceola County, Florida Facts for Kids. Kiddle Encyclopedia.