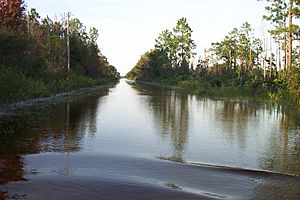 Bull Creek is part of the Orlando–Kissimmee Metropolitan Statistical Area.

The community name derives from Bull Creek and the Bull Creek Wildlife Management Area that borders it. It is in the Eastern Standard time zone. Elevation is 65 feet (20 m).

George W. Hopkins purchased 104,000 acres (420 km2) in east-central Florida in 1902, including what would become Bull Creek. Hopkins build a small railroad to move timber, mostly Cypress to his sawmill in Melbourne, the area was heavily logged from 1912 until 1928.

Cypress is still being harvested from the area surrounding Bull Creek but the trees are smaller and used mostly for mulch.

In 1967, 23,350 acres were purchased by the state for flood control, the Bull Creek area feeds the Saint Johns River and a large levee was built to control the water released into the river. In 1970, the state owned land was leased to the Fish and Wildlife Conservation Commission to be used as a Wildlife Management Area (WMA).

In the 1960s, corrupt county officials allowed remote swampland bordered on two sides by the WMA to be pre-platted into a paper subdivision (subdivision in name only); it was then mass-marketed nationwide to unsuspecting buyers as an investment.

Many of these buyers becoming aware they had been scammed stopped paying their property taxes and the land was purchased by locals for use as hunting camps or for agricultural use. Over time some owners have become full-time residents.

Many of the remaining lots are too small, too wet and too far from the only maintained road to be built on; further growth of this community is unlikely.

The population of Bull Creek consists of less than 100 mostly working-class families who prefer a rural lifestyle.

Zoning is agricultural with no more than one single-family home per 5 acres (20,000 m2) allowed, agricultural land can be used for conservation, cattle, timber and other agricultural uses.

Bull Creek WMA offers more than 23,000 acres (93 km2) of recreational land, open to the public year round for hiking, horseback riding, and viewing wildlife. Fishing at Billy Lake, Crabgrass Creek and Bull Creek is common and when in season deer, hog, turkey and small game hunting is available.

All content from Kiddle encyclopedia articles (including the article images and facts) can be freely used under Attribution-ShareAlike license, unless stated otherwise. Cite this article:
Bull Creek, Florida Facts for Kids. Kiddle Encyclopedia.