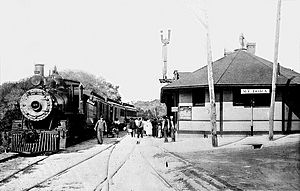 Mount Dora is a city in Lake County, Florida, US. As of the 2010 census it had a population of 12,370, and in 2019 the population was estimated to be 14,516. It is part of the Orlando-Kissimmee, FL, Metropolitan Statistical Area. Founded in 1880, Mount Dora is known for its small-town southern charm. It has many antique shops in the downtown area. The downtown area overlooks Lake Dora. Mount Dora is home to one of three freshwater lighthouses in Florida. It hosts many monthly festivals and is known as the "Festival City".

The town of Mount Dora began in 1874 when the area was settled by David Simpson, his wife, and two children. In 1880, Ross C. Tremain became the town's first postmaster. A post office called Mount Dora has been in operation since 1883. At the time, the town was called Royellou, named for Tremain's three children.

The community was later named for Dora Ann Drawdy, who was an early settler of the town in the mid-1880s. In 1846, the surveyors named Lake Dora after her, and in 1883 the town was renamed after the lake. The Mount in Mount Dora reflects the fact that the town is on a plateau 184 feet above sea level. In addition to this, Dora is memorialized through Dora Drawdy Way, an alleyway located in the downtown area.

The town became a popular winter retreat for hunters, fishermen, and boaters, and in 1883 the Alexander House, a two-story hotel, was opened. The Alexander House has been renamed several times and was later listed on the National Register of Historic Places in 1975. A railroad came to town in 1887, followed by an orange packing house, fertilizer factories factories, and a cannery were established as well. The town was granted a charter in 1910 with John Philip Donnelly as its first mayor; the town had 371 residents at the time.

In the 1920s, Mount Dora began to grow significantly, both in residential development and business development. Mount Dora began investing in public infrastructure, including streetlights, a water system, curbs, and paved roads. The first two public parks were created and the Mount Dora Community Building was built largely from funds raised by Mount Dora residents. The building has since served as the city's performance and meeting venue.

With the fear of the Cold War on the mind's of some of Mount Dora's residents, they decided to construct a fallout shelter. With contributions from twenty-five families, the underground shelter known as "The Catacombs" was built. It could support 100 people for six months and contained a conditioner and dehumidifier, as well as food and supplies. The catacombs remain today, but the location is a secret.

The following are listed on the National Register of Historic Places:

The Mount Dora Historic District is a U.S. historic district in downtown Mount Dora. The district is roughly bounded by 3rd Avenue, 11th Avenue, Clayton Street, and Helen Street. It was added to the National Register of Historic Places on October 1, 2009.

The Mount Dora History Museum, which is the project of the Mount Dora Historical Society. This museum is the location of the first fire station and city jail, which opened in 1923. The exhibits highlight activities in Mount Dora from the 1880s to the 1930s. The museum is located near Donnelly Park.

Modernism Museum Mount Dora opened in 2013 and is located on East Fourth Avenue. Two stories high, this museum focuses on the Studio Arts Movement, which is a form of modernism where high art meets craftsmanship, and is constantly posing the question "is it sculpture, or is it furniture?"

The Mount Dora Museum of Speed opened for business in 2001 to adults only and is located on North Highland Street. In 2015 it was named Mount Dora's number one attraction by Tripadvisor for the 3rd year in a row. The museum displays muscle cars, "pro cars", foreign cars, and a 45+ year old collection of "automobilia" (auto antiques). The staff displays ten to twelve of their personal cars, and twelve to fifteen cars are on sale at most times.

The Mount Dora Center for the Arts is a multifaceted community center which provides fine arts gallery exhibitions, education programs for all ages and levels, an annual fine art action, monthly Art Strolls, and helps put together the Annual Mount Dora Arts Festival. It is located on East Fifth Avenue. It was founded by a group of volunteers who wanted to celebrate the arts in Mount Dora as well as to further promote and improve their arts festival.

Mount Dora is home to several parks and nature preserves.

Gilbert Park is located at the intersection of Tremain Street and Liberty Avenue. This park was named for its donor, Mr. Earl Gilbert. The park includes a barbecue area, several pavilions, and a large playground. The park has recently gone through renovations, which included two new pavilions, upgraded restrooms, new landscaping, and improved parking. The "Wood Wonderland" playground was updated and expanded.

Donnelly Park is located in the downtown Mount Dora area at the intersection of Donnelly Street and 5th Avenue. It is the location of their annual tree lighting ceremony, as well as several of Mount Dora's special events. The park contains, benches, restrooms, a fountain, and shuffleboard courts, and a tennis court. It is the location of the Donnelly Park building, which can be rented out for special events.

Grantham Point Park is located on Tremain Street across from Gilbert Park on Lake Dora, Grantham Point Park is sometimes referred to as "Lighthouse Park". The 35 foot lighthouse was dedicated on March 25, 1988. Built of bricks covered with stucco, the lighthouse stands sentry over the Port of Mount Dora. Its 750-watt photocell powers a blue pulsator sending out a guiding light to all boaters navigating Lake Dora after dusk. The Mount Dora Light is the only inland freshwater lighthouse in Florida.

The Lake County Water Authority has several preserves in the area.

The Annual Mount Dora Music Festival is held the 3rd weekend in February. The festival began in 1991 as a way to celebrate classic music and public education. It has since evolved to feature a diverse celebration of music and has brought orchestral music to local schools, classical performances to retirement communities, and free public concerts to the community. It is organized by a volunteer Board of Directors.

The Mount Dora Spring Collectibles and Crafts Show is held every 3rd weekend in March in the downtown area. The festival includes antiques and collectibles dealers, and crafters and artists displaying their treasures for sale. The festival lasts for two days.

The Sailboat Regatta and Mount Dora Blueberry Festival are held in April. The Regatta, which is hosted by the Mount Dora Yacht Club, is the oldest in the state and will be celebrating its 63rd year in 2016. The inaugural Blueberry Festival was hosted in 2015 on the shores of Lake Dora to celebrate the agricultural importance of blueberries to the Central Florida economy.

The Mount Dora Blues and Groove weekend takes place in May. This festival is hosted by Visit Mount Dora and is produced in partnership with Full Sail University. It brings blues music to Elizabeth Evans Park and was founded in 2009.

The Mount Dora Seafood Festival takes place in August and began in 2015. The festival includes several booths with fresh seafood, as well as beer, wine, crafters, and activities for children.

The Mount Dora Chamber of Commerce holds Florida's oldest Bicycle festival annually in early October. It celebrated its 41st year in 2015 and is three-day event. the Festival includes a variety of daily rides, ranging from 8 mils to 55 miles.

Mount Dora's largest event, the Mount Dora Craft Fair, draws over 250,000 visitors every 4th weekend in October. It features more than 400 talented crafters and artists, and includes an eclectic mix of arts and crafts from sculptures to ceramics to paintings to woodworking. In addition to this, there's food an entertainment.

Mount Dora is the setting for the classic post-apocalyptic novel, Alas, Babylon by Pat Frank, under the fictitious name of Fort Repose. Frank lived there with his last wife.

Mount Dora is one of the settings in Steve Berry's action adventure thriller "The Columbus Affair".

Napoleon Hill, author of Think and Grow Rich (1937), lived in Mount Dora during the 1930s and '40s. He lived in a large house called The Castle overlooking Lake Dora, with a swimming pool on the roof. It was torn down in the 1980s.

The book Doesn't She Look Natural by Angela Hunt is also set in Mount Dora.

The buildings in downtown Mount Dora were painted pink for the feature film, Honky Tonk Freeway. Being a movie location provided an economic boost for merchants, helped restore the downtown area, and gave Mount Dora a dose of national publicity.

An independent Italian-American production crew filmed a horror film titled Witch Story in the downtown area. The film was never released in the United States.

Two years following Witch Story, an HBO movie titled Somebody Has to Shoot the Picture was filmed. The movie starred Roy Scheider and Bonnie Bedelia.

The tennis film, The Break, took place partly in the city of Mount Dora. It was filmed by an independent production company and aired on cable TV.

Southern Technical College used to operate a campus in the city which has since closed.

All content from Kiddle encyclopedia articles (including the article images and facts) can be freely used under Attribution-ShareAlike license, unless stated otherwise. Cite this article:
Mount Dora, Florida Facts for Kids. Kiddle Encyclopedia.